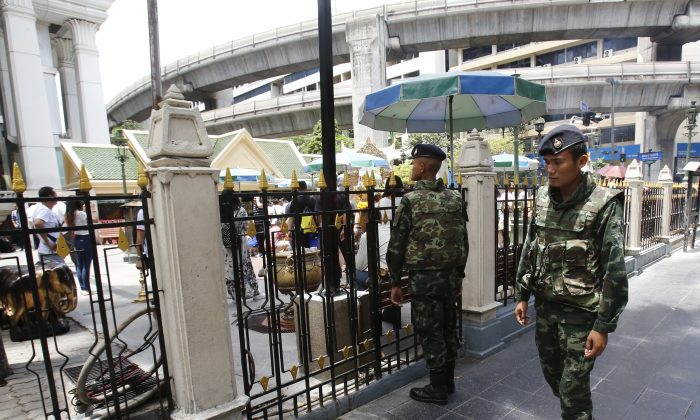 BANGKOK—Thai police said Thursday they have uncovered a plot by opponents of the military government involving an armed attack during upcoming events commemorating the country’s monarchy.

Police made the allegation at a news conference after showing two arrested suspects who were guarded by heavily armed commandos. Nine people in total are being sought.

The allegations come as the ruling junta is facing the most extensive public criticism since it seized power in May last year, mostly in connection with allegations of corruption by senior officers in connection with construction of a park honoring past Thai kings. Human rights concerns have also sharpened after two high-profile prisoners accused of insulting the monarchy died in suspicious circumstances while in army custody.

Police declined to give many specifics about the alleged plot, but indicated the plotters were part of the Red Shirt movement loyal to former Prime Minister Thaksin Shinawatra, who was ousted by a military coup in 2006. The Red Shirts occupied parts of central Bangkok in 2010 to protest the then-government, but a violent crackdown by the army ended the protests.

Police appeared to suggest that the alleged attacks were timed to coincide with the 88th birthday of King Bhumibol Adulayadej on Dec. 5, which is being celebrated by a mass bicycling event, “Bike for Dad,” organized by the military for Dec. 11.

Police said the plotters were linked to what he called the “Khon Kaen model,” which recruited people, collected weapons and sought to take over military and police camps. Khon Kaen is a city in Thailand’s northeast, where Red Shirt support is strongest.

Despite the allegations of would-be violence, the official police announcement said the arrested men were being held on a charge of lese majeste — insulting the monarchy — a crime punishable by 3 to 15 years in prison. The junta has aggressively pursued lese majeste cases, which critics charge are used to silence legitimate criticism of the government.

Police and other officials sought to ward off criticism that the case was a government fabrication to deflect attention from the scandal.

“I want to assure you that this group is real,” said National Police Chief Chakthip Chaijinda. “I want to tell people nationwide that this group exists. It is not a made-up group. We have had information about them, we actually arrested them and there are weapons.”