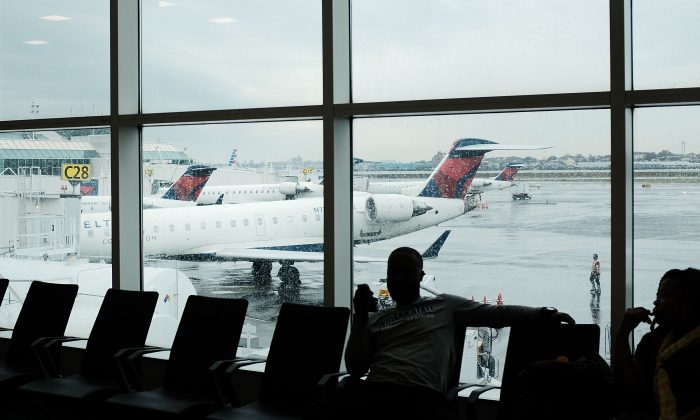 Delta planes sit on the tarmac at LaGuardia Airport, the day before Thanksgiving, the nation's busiest travel day on Nov. 22, 2017, in New York City. (Spencer Platt/Getty Images)
US News

A 19-year-old college student nearly got arrested by the Transportation Security Administration (TSA) after a well-intentioned hand gesture gave the wrong impression.

Diana Durkin, a student at Texas Tech University was excited to return to campus for her sophomore year, after taking a semester off to help her family recover from Hurricane Harvey, Fox News reported.

Durkin said that Texas Tech fans often salute each other with a finger gun whenever they see each other. The salute is also a reference to the university’s mascot, the Masked Rider.

Fearless and I are wishing our Red Raiders good luck today in Houston! Let’s Wreck ‘Em Tech! #gunsup Thanks Texas Tech University for the photo!

But the innocent hand slogan is exactly what Durkin nearly got arrested for.

As she was waiting in line to go through security before a Jan. 6 flight out of William P. Hobby Airport in Houston, Durkin spotted a man in a Texas Tech hoodie and automatically threw up a finger gun. The man instead gave her an odd look.

“I love Texas Tech. I love the people, I love the school. Anytime I see someone I get really excited,” she told BuzzFeed News.

Then a TSA agent took her out of the line to ask about her hand gesture.

“In the airport security line and I see someone wearing a Texas Tech hoodie and I look at them and do the gun hand signal because wreck em amiright [sic]. tsa is now pulling me aside to talk to me,” Durkin wrote in a Jan. 6 Tweet that has since gone viral.

tsa is now pulling me aside to talk to me :((

The tweet has gained over 38,709 likes and over 3,792 retweets at the time of publication.

“‘What are you doing? You can’t do that in an airport,’” Durkin recalls the agent telling her. She told Buzzfeed that the agent also gave her a full screening and pat down, nearly sending her to tears.

“Oh my gosh, they think I’m a terrorist. … Oh my gosh I’m going to jail,” Durkin told Buzzfeed. “I’m just sitting there, almost in tears, like, ‘No, I’m just really dumb, I’m not a terrorist!’”

Luckily the incident didn’t escalate any further. Durkin said the TSA eventually let her go with just a warning.

“At the time, I was scared to death,” she told Buzzfeed.

Durkin said she has learned her lesson and will treat the ordeal as a funny story.