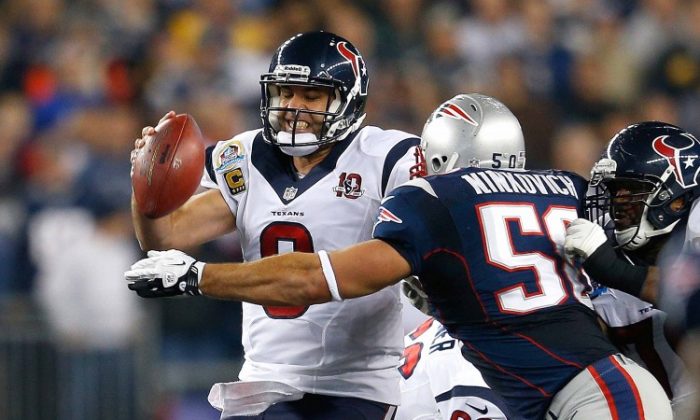 Monday night’s matchup between the Houston Texans and New England Patriots at Gillette Stadium in Foxborough, Mass. was supposed to be something of a showdown in the AFC.

The Pats (10–3), however, left no doubt that they are the team to beat with a 42–14 drubbing of the Texans (11–2). New England essentially had the game wrapped up early in the second quarter after jumping out to a 21–0 lead.

Of course, the Patriots are a perennial NFL powerhouse, but the Texans came into the game with the best record in the AFC, unbeaten on the road, and having beaten the other two AFC division leaders Baltimore (9–4) and Denver (10–3).

The game was to be another measuring stick for the Texans, taking on Tom Brady and Co. in December at Gillette Stadium. But, just as importantly, a win would have given Houston a three-game lead over New England and a two-game lead over Denver in the race for top seed in the AFC.

But now, with a one-game lead over New England and Denver and a more difficult remaining three games, the Texans’ chances at top spot in the AFC are significantly worse.

In fact, with Houston facing Indianapolis (9–4) twice in the final three weeks, wrapping up the AFC South division is not the foregone conclusion it once was.

Texans quarterback Matt Schaub had won 15 of his last 16 starts prior to Monday night, but New England’s defense shut him down, limiting him to 232 passing yards and intercepting him once.

Houston’s offense, ranked No. 2 in the NFL, was, for the first time all season, shut out in the first half. The Texans weren’t able to reach the Patriots red zone until mid-way through the third quarter.

On the other hand, the well-balanced Texans, whose defense is currently ranked No. 7, could not keep up with the fast pace of New England’s offense and Brady threw four touchdown passes and had a 125.4 QB rating for the day.

New England also made Houston’s J.J. Watt a non-factor. The Texans defensive lineman is second in the NFL in sacks with 16.5 and has deflected 15 passes, but he had no sacks and no pass deflections on Monday.

“You’ve got to go in there and play close to perfect and be at your best. We were far from that and we paid the price,” Texans head coach Gary Kubiak said according to houstontexans.com.

It was as if the Texans psyched themselves out. They didn’t step up. They didn’t make the plays they needed to. And they were undisciplined.

It was an education in prime time courtesy of the Patriots as the most anticipated Monday night football game this year turned into a very one-sided affair.

But from one big game to another, the Texans don’t have time to lick their wounds. With a shortened break between games, they welcome Indianapolis on Sunday. They know a win gives them the division title. A loss opens up a major can of worms.

“We’ve got a great opportunity ahead of us and we need to stay focused on that,” Kubiak said.