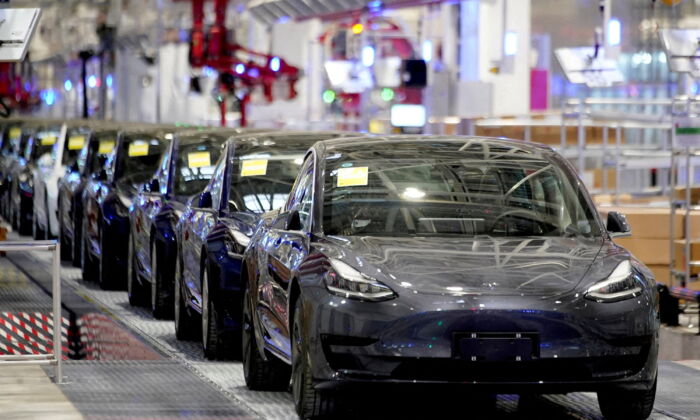 Tesla's China-made Model 3 vehicles are seen during a delivery event at its factory in Shanghai, China, on Jan. 7, 2020. (Aly Song/Reuters)
China Business & Economy

SHANGHAI—Tesla is extending a production halt at its Shanghai factory for at least one day, an internal notice seen by Reuters showed.

The Shanghai factory, located in the Pudong district east of the city’s Huangpu River, suspended production from Monday to Thursday after the city launched a two-stage lockdown to combat a surge in COVID-19 cases.

The lockdown on districts east of the river is scheduled to lift in the early hours of April 1 and the U.S. automaker initially planned to resume production that day. However, the latest notice seen by Reuters said that it now aims to do so on April 2.

Shanghai is set to lock down areas west of the river from the early hours of Friday morning.

Tesla declined to comment on the suspension of production.

It told Reuters it strictly implemented China’s epidemic prevention and control requirements and would adjust its work based on the authorities’ COVID-19 prevention policies.

By Zhang Yan and Brenda Goh