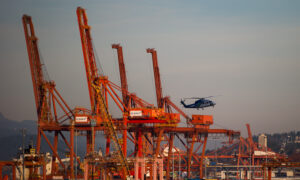 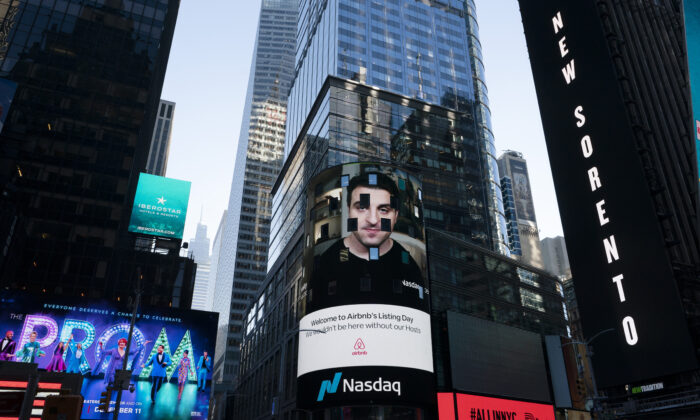 Brian Chesky, CEO of Airbnb, is shown on a screen at the Nasdaq MarketSite in New York on Dec. 10, 2020, the day of Airbnb’s initial public offering. (AP Photo/Mark Lennihan)
Investment

Despite the COVID-19 pandemic, U.S. stocks ended 2020 at record highs thanks to their heavy weighting toward technology, but Canadian stocks—with higher weightings toward banks and energy—lagged well behind. Digging deeper beneath the headline numbers reveals what a difficult year it was for smaller companies, while larger ones tended to fare much better.

The pandemic is driving major shifts in the economy toward online shopping and working from home. These trends are reflected in the stock market—a kind of judgment on the future prospects for companies and their industries.

In the United States, larger companies posted almost twice the gain as smaller ones—and the smaller the company was, the tougher 2020 was, according to BMO.

Stocks are not reacting to the COVID-19 disease but to the lockdowns, Peter St. Onge, senior fellow at the Montreal Economic Institute, told The Epoch Times.

“The actual disease itself doesn’t really have much of an economic impact,” he said, adding that for countries that did not lock down or did so very mildly, like Taiwan or Sweden, there was minimal market impact.

Big companies are better able to manage lockdowns than small ones are and were even treated more favourably by governments regarding being able to stay open in some cases, St. Onge said.

“A one-time lockdown can look kind of like a natural disaster,” St. Onge said. “But once it becomes a repeat threat, then it has to go into business planning.

“Basically a second lockdown, even if it’s milder, can create much more severe economic scar tissue, because now it has to be taken as a permanent business risk.”

“A lot of the [small] businesses have not formally failed yet,” he added.

“If you’re collecting benefits for not being open, it’s in your interest not to formally close, right?” St. Onge said. “May as well keep the thing going as a zombie, collect the benefits, and then once the benefits run out, you can take the temperature of the market [and] decide what you’re going to do.”

The U.S. S&P 500—a broad gauge of the biggest, most popular stocks—rose 16 percent in 2020, including a 68 percent increase from its nadir in March. Canada’s TSX Composite Index finished up just 2.2 percent. The tech-laden Nasdaq rose 43.6 percent—its highest one-year gain since 2009.

With the S&P 500, it was a case of the haves and the have-nots since nearly two in five companies ended in the red.

“It’s been a heck of a year in terms of technology cementing their way into our life,” said tech entrepreneur and investor Bruce Croxon in a segment on BNN Bloomberg. He added that tech was quick to respond to the work-from-home trend and the pandemic has condensed six years of tech growth into the last six months.

With the push for clean energy and the economic downturn, energy was the biggest drag on the stock market in 2020. It is a sector facing challenges on all fronts, from heavier regulation and taxation in Canada to a lower oil-price regime being the main challenge for U.S. firms.

It may seem counterintuitive given the pain on Main St. with its elevated unemployment, but as U.S. stock indexes pushed to record highs, a record number of companies also went public, such as Airbnb and DoorDash.

What’s remarkable about 2020 is that the boom in U.S. IPOs has been helped by a surge in offerings from special-purpose acquisition companies (SPACs), which are also called blank-cheque companies. SPACs raise money through IPOs with the intent of buying a private company and taking it public.

“In the third quarter, there were a whopping 116 SPACs that went public, representing 56 percent of all IPOs for the quarter,” said Factset’s Sara B. Potter, senior marketing content specialist and economic contributor in a report.

On Wall Street, shares offered by companies that went public in 2020—via IPOs or direct listings—surged on average 75 percent during the year.

Being able to buy at the IPO price very often beats the gain realized when buying in the open stock market. Investing in IPOs typically favours the large institutional investor over the mom & pop investor.

In Canada, the $7.41 billion total value of initial public offerings (IPOs) in 2020 was more than double the $2.97 billion total value in 2019—a banner year for stocks with the Toronto Stock Exchange rising nearly 20 percent. It was the largest total IPO value since 2006, according to Bloomberg.

A common adage with investing in stocks is that past performance does not guarantee future returns. Many professional investors and strategists suggest that what will work in 2021 will be different from what worked in 2020.

“Investors should play for that rebound,” said Mike O’Rourke, chief market strategist at JonesTrading in an interview with BNN Bloomberg.

IPOs Paid Out Big for US Investors in 2020

BMO chief investment strategist Brian Belski forecasted a broadening of the stock market rally and favours financials and industrials to do well in 2021, though it will be a process, he told CNBC.

However, investors agree that the pandemic has not run its course yet and will continue to affect the stock market—forecasts are more dependent on what COVID has in mind, as they say.

The tide that lifted all boats was the trillions of dollars of government stimulus and central banks driving interest rates to near zero. Policy-makers did not let the stock market stay at its March bottom for very long at all.

Nearly as soon as the multi-year bull market in stocks that began during the financial crisis ended, a new one began in an environment favourable to the big companies, especially in tech.