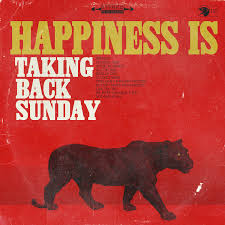 Taking Back Sunday Brings Happiness Is

Taking Back Sunday should be given plenty of credit for everything they’ve achieved over the past 15 years. After significant lineup changes where John Nolan and Shaun Copper left and eventually rejoined in 2010 to bring TBS back to its Tell All Your Friends lineup, they continue to walk away from their “Emo” image by releasing material different from the previous one.

With their 2011 self-titled being heavier, edgier and possibly their most consistent record since Where You Want To Be, they regress to a less mature sound on their sixth album Happiness Is.

Happiness Is does have its bright spots such as its lead single “Flicker, Fade,” a track powerful enough to be considered an anthem and “Beat Up Car,” where lead singer Adam Lazzara’s vocals are layered beautifully and smoothly along with the backing vocals on the chorus.

“Better Homes and Gardens” masterfully tackles head-on the theme of a failed relationship as Lazzara sings “When you took that ring off /threw it at your feet/ you didn’t say a word much less look at me/the courage that must have took/I just couldn’t believe it.”

Happiness Is also contains filler tracks like “We Were Younger Than,” which have no real place on the album and almost borderlines Nickelback’s “Photograph” towards the end.  “A Decade Under the Influence” from Where You Want To Be is a stronger track that briefly touches on the band’s old days.

“Preface” serves no real purpose nor serves as a transition to “Flicker, Fade” aside from the fact that they know how to record an instrumental track.

Ultimately, Happiness Is is a perfectly fine record and easily listenable but it’s not as memorable as previous ones. However, don’t be ready to write them off as a nostalgic act that should be preserved in one’s teenage years.