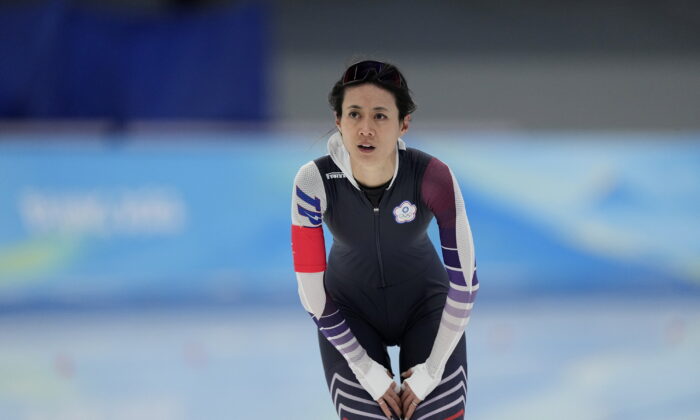 Huang Yu-ting of Taiwan reacts after her heat in the speed skating women's 500-meter race at the 2022 Winter Olympics in Beijing on Feb. 13, 2022. (Ashley Landis/AP Photo)
Taiwan

TAIPEI, Taiwan—Taiwan’s premier has ordered an investigation into a Taiwanese Olympic speed skater for wearing what appeared to be a suit from China’s team during training.

Symbols of the two sides are especially sensitive at a time when the Chinese Communist Party (CCP), which claims Taiwan as part of its territory even though the island has long operated with its own government, is trying to intimidate the democracy by flying fighter jets and bombers nearby.

Huang Yu-ting, one of four Taiwanese athletes at the Beijing Winter Olympics, posted a video on her social media page Jan. 23 showing her training in what appeared to be a Chinese suit, the Central News Agency reported. It said Huang apologized and removed the video.

Premier Su Tseng-chang asked the Ministry of Education and the Sports Administration to investigate so Huang would “receive an adequate punishment,” CNA reported, citing a Cabinet spokesperson, Lo Ping-cheng.

The Olympics are one facet of a wide-ranging campaign by the CCP to isolate Taiwan.

Taiwan’s Sports Administration said Huang would face no penalty but should be “more aware of the sensitivity of cross-Taiwan Strait politics,” according to CNA.

The Taiwanese team leader at the Olympics, Steven Chen, said the Chinese Taipei Olympic Committee would review in April whether Huang was wearing the appropriate clothing, according to CNA.