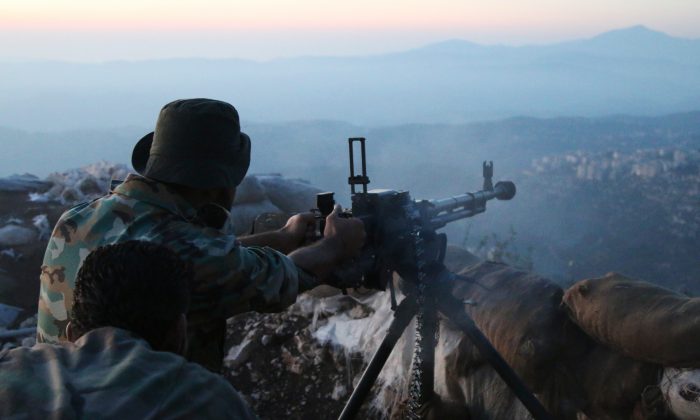 DAMASCUS, Syria—Syrian government forces launched an offensive Thursday in the central province of Homs under the cover of Russian airstrikes in an attempt to clear the central region of militants and open the highway between Syria’s third and fourth largest cities, a military official and activists said.

The offensive came as a senior Iranian official told reporters in Damascus that Tehran would consider sending troops to Syria only upon a request from the Syrian government.

Alaeddin Boroujerdi, the head of an influential parliamentary committee on national security and foreign policy, reiterated his country’s full support for the Syrian government, stressing that a political solution is the only way for Syria to emerge from the current crisis.

Boroujerdi’s comments came a day after a regional official said hundreds of Iranian troops are being deployed in northern and central Syria, dramatically escalating Tehran’s involvement in the civil war as they join allied Hezbollah fighters in an ambitious offensive to wrest key areas from rebels amid Russian airstrikes.

Asked whether Iran has forces on the ground, Boroujerdi said: “According to Iran’s anti-terrorism strategy, we submitted weapons and experts to those two countries (Iraq and Syria). Any other request will be considered and debated in Iran.”

Iranian and Syrian officials have long acknowledged Iran has advisers and military experts in Syria, but denied the presence of any ground troops. Wednesday’s statements by a regional official and activists were the first confirmation of Iranian fighters taking part in combat operations in Syria.

Also Thursday a Syrian military official told The Associated Press that the army began an operation in Homs province aiming to “restore security to these areas.” The official spoke on condition of anonymity because he was not authorized to speak to the media.

The official said troops captured the town of Khaldiyeh near the central city of Hama.

Homs-based activist Bebars al-Talawy said the offensive began early Thursday and was preceded by intense air strikes and shelling. He added that the aim of the government is to open the highway between the cities of Homs and Hama.

“Shells were raining on civilian homes,” al-Talawy said via Skype. “The air raids even shook the city of Homs,” several miles away from the front lines, he said.

The Britain-based Syrian Observatory for Human Rights said Russian warplanes conducted at least 15 airstrikes on the edge of the rebel-held town of Talbiseh and nearby areas, killing 10 people including six opposition fighters.

Russia began its air campaign Sept. 30, and Syrian troops and allied militiamen launched a ground offensive against rebels in central Syria a week later. Russia says its airstrikes are meant to weaken the Islamic State group and other “terrorists” in Syria, but Western officials and Syrian rebels say most of the strikes have focused on central and northern Syria, where the Islamic State group does not have a strong presence.