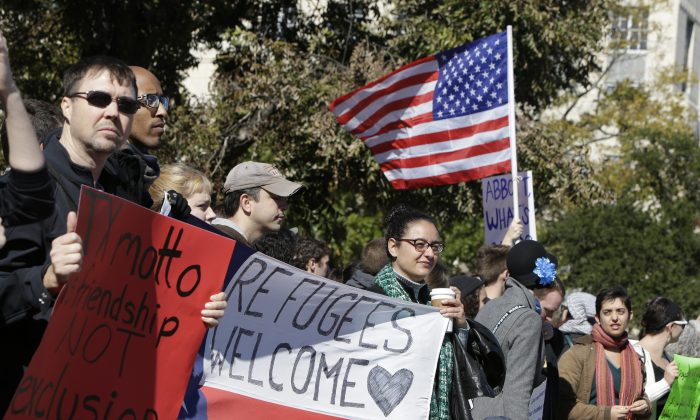 Members of The Syrian People Solidarity Group protest on November 22, 2015 in Austin, Texas. The group was protesting Texas governor Greg Abbott's refusal to allow Syrian refugees in the state. (Erich Schlegel/Getty Images)
US

Syrian Refugees Resettled in Resistant Texas & Indiana: ‘Like breathing a sigh of relief’

DALLAS—Syrian families have been settled in Texas and in Indiana, the groups helping them said Tuesday, defying efforts by the conservative states’ governors to stop their arrival.

A family of six went to live Monday near relatives already living in the Dallas area, said Lucy Carrigan, a spokeswoman for the International Rescue Committee.

Carrigan declined to make family members available for an interview, but she said they were not fazed by the state’s fight or concerns that they might not be welcome in Texas. Fifteen more Syrians are expected to arrive in Houston this week, according to court filings made by federal officials.

Meanwhile, a Syrian couple and their two small children arrived safely Monday night in Indianapolis, where they have relatives, the Roman Catholic Archdiocese of Indianapolis said in a statement. It said the family fled Syria three years ago and underwent two years of security checks before being allowed to enter the United States.

Archbishop Joseph Tobin said he considered Gov. Mike Pence’s recent request not to bring the family to Indiana until Congress had approved new legislation regarding immigrants and refugees. But he said he welcomed them anyway because helping refugees “is an essential part of our identity as Catholic Christians.”

Pence and Texas Gov. Greg Abbott were among more than two dozen Republican governors who said they would refuse any new Syrian refugees following the deadly Nov. 13 Paris attacks, which have been linked to the Islamic State group operating in Syria.

The debate over immigration has only become more charged since, with Republican presidential front-runner Donald Trump drawing widespread condemnation for suggesting all Muslims should be barred from entering the country.

Pence rebuked Trump on Twitter Tuesday, saying calls to ban Muslims “are offensive and unconstitutional.” Abbott, meanwhile, was in Washington with U.S. Sen. Ted Cruz (R-Texas) to support a bill Cruz will introduce allowing governors to reject any refugees they deem to be a security risk.

Federal officials and refugee agencies have ignored the governors’ calls to halt resettlement, saying states are denying a safe haven to families displaced by war, and that a state’s role in resettlement does not include the authority to block them.

Texas’s health commissioner sent letters to refugee resettlement agencies threatening them with the loss of state cooperation if they continued to bring in Syrians. The state then filed a lawsuit against the IRC and the federal government.

The state has since backed down from an immediate demand to halt the arrival of Syrian refugees. A hearing is expected in the lawsuit next week.