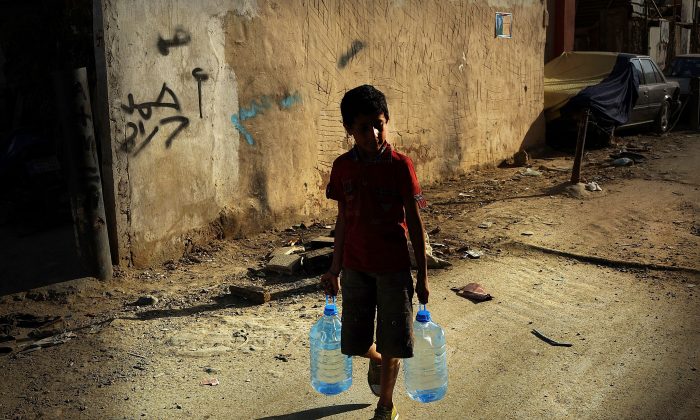 A boy walks with jugs of water in a poor neighborhood with a high concentration of Syrian refugees in Beirut, Lebanon, on June 27, 2013. (Spencer Platt/Getty Images)
Middle East

Syrian Refugees in Lebanon Are Falling Into Slavery and Exploitation

Five years after the beginning of the Syrian conflict, Syrians now make up the largest refugee population in the world. Of the 5 million women, men, and children who fled Syria, more than 1 million sought protection in Syria’s neighbor and former “colony,” Lebanon. But safety eludes them: hundreds of thousands of refugees who’ve fled to Lebanon now face abject poverty, living in precarious and often unsafe accommodation, and scraping by with the barest of means.

A new report from the Centre for Trust, Peace and Social Relations at Coventry University, supported by the Freedom Fund, has also found that more and more refugees in Lebanon are falling prey to slavery and exploitation.

One of the biggest problems is child labor. We estimate that 60–70 percent of Syrian refugee children (those under 18) in Lebanon are working. Rates are even higher in the Beqaa Valley in the east of the country, where children aged as young as five pick beans, figs, and potatoes. In towns and cities, Syrian children work on the streets, begging, selling flowers or tissues, shining shoes, and cleaning car windscreens. Children also work in markets, factories, auto repair shops, aluminum factories, grocery and coffee shops, in construction, and running deliveries.

Syrian families in Lebanon are increasingly marrying their young teenage daughters to older Syrian men, usually aged in their twenties and thirties. While we did not find evidence of child trafficking as has been reported in the refugee camps of Jordan, girls often do not consent to these marriages, and they cannot realistically choose to leave their husbands. Once married, they very probably have no choice about whether or when to have sex, and are likely to face domestic violence.

Where Have 4.8 Million Syrian Refugees Gone?

Beyond child marriage, sexual exploitation is a growing issue for female refugees in Lebanon. Humanitarian organizations in Lebanon often talk about “survival sex” among refugee populations—for example, sex as a form of payment to people smugglers.

In the course of our research, we heard that landlords and employers are commonly coercing refugee women into providing “sexual favors” in return for rent, food, and/or employment for themselves and their families. But these women face sexual exploitation in many forms: Lebanese security forces recently freed 75 women, most of them Syrian, from sexual slavery in the Jounieh area, a notorious red light district north of Beirut.

Sexual exploitation aside, we found that many adult refugees (men and women) are being held in forced labor via violence or intimidation and physical restrictions on their movement. Even those refugees who manage to obtain a legal work permit through the sponsorship system are at risk of exploitation by their sponsors on a quid-pro-quo basis.

These are not isolated examples. According to our interviewees, these problems are now so endemic among the refugee population in Lebanon that they can almost be considered the norm. So how did this come about?

Denied refugee status by a government, which has imposed a series of highly restrictive residency requirements on Syrians including denying the right to legally work, families have few legal and safe ways to support themselves.

Since the Lebanese authorities deem refugees without valid paperwork to be in the country illegally, many are at constant risk of arrest and detention, and of potential mistreatment once detained. Raids on refugee settlements, municipal curfews on refugees, and the establishment of checkpoints by Lebanese security forces have become commonplace. We also found that Palestinian refugees from Syria, already highly discriminated against in Lebanon, are especially at risk.

How the EU Proposes to Change Its Asylum Laws

As a result, women and men engage in any form of employment they can find, no matter how bad the conditions or how severe the risks of slavery and exploitation.

These same factors are also fueling the uptick in child labor. While Syrian adults (especially men) are often stopped at checkpoints, children are able to move around much more freely. Some Lebanese employers are capitalizing on this, since children are far cheaper to employ than adults and also more compliant—and the Lebanese authorities are taking next to no action to prosecute or to discourage them.

The proliferation of child marriage, meanwhile, stems from refugee families seeking to protect their teenage daughters from sexual harassment and abuse. They wish to provide for their daughters’ economic security and to reduce the economic burden on the family. This is compounded by the fact that child marriage in Lebanon can be brokered by some of the religious courts.

And yet, despite a concerted campaign, the Lebanese authorities have thus far stood steadfast against the introduction of a civil marriage law which might provide some protection.

Our report offers a set of targeted and integrated recommendations to counter slavery and exploitation of Syrian refugees in Lebanon.

The starting point is to ensure that Syrians fleeing conflict and persecution are properly recognized in Lebanon as refugees, that they can legally work, and that their children can go to school. It’s also vital that tackling slavery is made a shared priority among every organization with a responsibility to assist Lebanon’s Syrian refugees. It is imperative that we improve data collection systems so that reliable information is available to guide the development of effective interventions.

By taking concerted steps to address the factors that contribute to slavery, Lebanon will be better placed to manage the prolonged humanitarian crisis. It will also develop institutions, laws, and policies that are more closely aligned with international human rights standards.

This will benefit everyone within its borders and make it an example to other countries—especially those in the EU—who are still struggling to respond adequately to the refugee crisis. Urgent action must be taken now.

Katharine Jones is a senior research fellow at the Centre for Trust, Peace and Social Relations, Coventry University, in the U.K. This article was originally published on The Conversation.