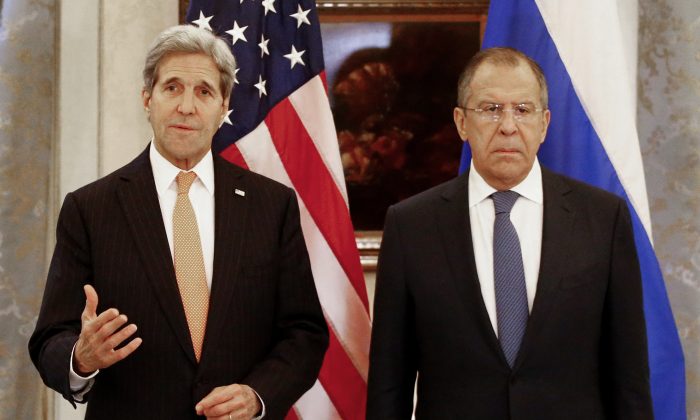 Russia's Foreign Minister Sergey Lavrov (R) and U.S. Secretary of State John Kerry before a meeting in Vienna, Austria, on Nov. 14, 2015. Foreign ministers from more than a dozen nations have begun meeting in Vienna seeking to find a way to resolve the conflict in Syria. (Leonhard Foeger/AP)
International

VIENNA—High-level talks on the future of Syria have produced an agreement to seek meetings between the opposition and the government of President Bashar Assad by year’s end, Germany’s foreign minister said Saturday.

Frank-Walter Steinmeier also said that there will be efforts to create a new constitution for the war-torn country and attempts to create a transitional government within 18 months.

Steinmeier spoke at the end of a daylong meeting of nearly 20 countries represented by foreign ministers and their deputies seeking to end Syria’s war. It was overshadowed by the terrorist shootings and bombings in Paris that killed more than 120 people.

Syria as a breeding ground for terrorism moved Saturday to the foreground of a meeting of foreign ministers on the war in that country, with participants linking the devastating shooting and bombing attacks in Paris to the Mideast turmoil and the opportunities it gives for terror.

U.S. Secretary of State John Kerry and Russian Foreign Minister Sergey Lavrov both condemned the attacks as they began meetings with senior representatives from Iran, Saudi Arabia and other countries with strongly conflicting views on how to end the more than four-year war. Key differences include what, if any role Syrian President Bashar Assad should play in any transition government and which groups fighting him should be grouped as terrorists.

Those differences appeared to be put aside at least temporarily as the meeting started.

“These kinds of attacks are the most vile, horrendous, outrageous, unacceptable acts on the planet,” said Kerry, after speaking with Lavrov and shortly before the main meeting convened at a luxurious Vienna hotel. “And the one thing we could say to those people is that what they do in this is stiffen our resolve, all of us, to fight back, to hold people accountable, and to stand up for rule of law, which is exactly what we are here to do.

“And if they’ve done anything, they’ve encouraged us today to do even harder work to make progress and to help resolve the crises that we face,” Kerry said.

Russia Calls for a New Syrian Constitution in 18 Months

Lavrov, standing next to Kerry, said there was “no justification for terrorist acts, and no justification for us not doing much more to defeat ISIS and al Nusra and the like,” adding: “I hope that this meeting as well would allow us to move forward.”

Ahead of the meeting, French Foreign Minister Laurent Fabius said the attacks in Paris made it all the more necessary for the international community to find a common approach in Syria and terrorism, sentiments echoed by the foreign ministers of Germany, Jordan and Saudi Arabia.

Jordan’s foreign minister, Nasser Judeh, said the Paris attack “reaffirms our collective commitment” to fight terror and extremism wherever it may occur, while EU foreign policy chief Federica Mogherini said no one could turn away from the common threat.

“We are together in this: Europeans, Arabs, East and West, all the international community,” she declared. “The best response to this is actually coming together, overcoming our differences, and trying together to lead the way towards peace in Syria.”

More than 250,000 people have been killed in the Syrian war. Eleven million have been uprooted from their homes. The conflict has allowed Islamic State militants to carve out significant parts of Syria and Iraq for their would-be caliphate. Europe and Syria’s neighbors, meanwhile, are struggling to cope with the worst migrant crisis since World War II.