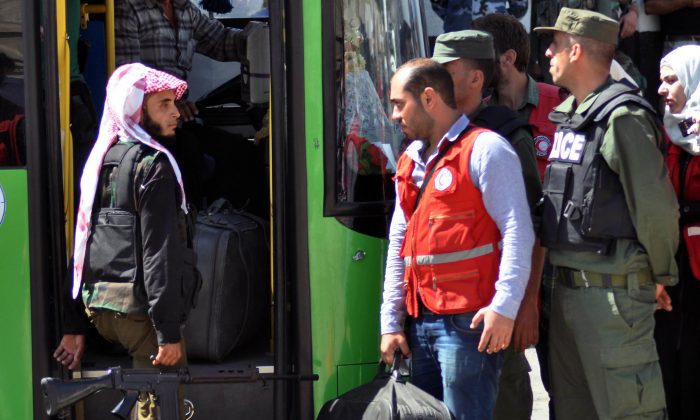 An anti-Syrian government fighter (L) carries his machine gun and looks at a Syrian policeman (R) as he leaves the last besieged rebel-held neighborhood of Al-Waer in Homs province, Syria on Sept. 26, 2016. (SANA via AP)
International

BEIRUT—Syria’s foreign minister said Monday that an internationally-brokered cease-fire is still viable, as rescue workers in Aleppo sifted through the rubble from the heaviest airstrikes on rebel-held areas of the northern city in five years.

Foreign Minister Walid al-Moallem, speaking to Mayadeen TV from New York, also said the government is prepared to take part in a unity government incorporating elements from the opposition, an offer that has been rejected in the past.

Opposition activists say more than 200 civilians have been killed in the past week under a sustained aerial campaign that U.N. envoy Staffan de Mistura called one of the worst of the 5 1/2-year war. The U.N. Security Council convened an emergency meeting but failed to take any action because of deep divisions between Russia and Western powers.

“What Russia is sponsoring and doing is not counterterrorism, it’s barbarism,” said U.S. Ambassador Samantha Power. “It’s apocalyptic what is being done in eastern Aleppo.”

Airstrikes on Aleppo on Monday killed at least six people, according to the Local Coordination Committees, an activist-run collective. The Britain-based Syrian Observatory for Human Rights reported hours later that 12 were killed, including three children.

Al-Moallem accused the U.S., Britain, and France of convening the Security Council meeting a day earlier in order to support “terrorists” inside Syria. But he said ongoing communications between U.S. Secretary of State John Kerry and Russian Foreign Minister Sergey Lavrov meant a truce agreement brokered two weeks ago is “not dead.”

Syria’s military declared the cease-fire ended one week ago.

The spokesman for Russian President Vladimir Putin said the cease-fire is ineffective, but that Moscow is not losing hope for a political solution to the country’s crisis.

However, Dmitry Peskov told reporters Monday that the Kremlin is concerned that “terrorists are using the cease-fire regime to regroup, to replenish their arsenals and for obvious preparations to carry out attacks.”

Peskov also took issue with harsh criticism by the United States and Britain over Russia’s actions in Syria.

He said Russia considers the tone of the criticism unacceptable and “such rhetoric is capable of causing serious harm to the resolution process” in Syria.

U.S. Secretary of State John Kerry said the Syrian and Russian governments “seem intent on taking Aleppo and destroying it in the process.”

“While they’re pounding Aleppo, dropping indiscriminate bombs, killing women and children, talk of a unity government is pretty complicated,” Kerry said during a visit to Colombia.

He said the Syrian opposition won’t be “particularly excited about having a negotiation when they’re being bombed and starved,” adding that statements by the Syrian government are “almost meaningless.”

In the central Syrian city of Homs, meanwhile, a second group of rebel gunmen and their families began evacuating from an opposition neighborhood.

Some 120 gunmen and their families are expected to leave al-Waer as part of an agreement to restore the government’s authority over the neighborhood, Homs Governor Talal Barazi said.

The agreement struck over al-Waer was in keeping with Assad’s determination to settle the war on his own terms, securing surrenders through sieges and staying in power at least through an interim period to steer the country out of crisis.

Pro-government forces have kept al-Waer under a steadily tightening siege since November 2013, prohibiting food and medical supplies from reaching the remaining 75,000 residents, down from 300,000 before the start of the war in 2011.

In exchange for the evacuations, the government is permitting aid convoys to supply the neighborhood with badly needed food and medical supplies.

A Syrian Arab Red Crescent convoy of 36 trucks delivered assistance for 4,000 families in the district Saturday.

U.N. humanitarian officials have condemned the sieges against civilians as “medieval” and in contravention to international law.

In New York, al-Moallem reaffirmed his government’s proposed roadmap to end Syria’s war, saying Damascus would support a referendum on a new constitution followed by parliamentary elections and the formation of a unity government.