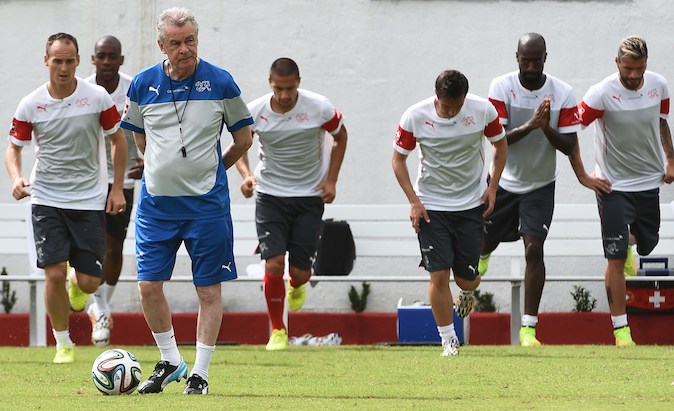 The game will be broadcast on RSI La 2, SRF zwei, TF1 Suisse, RTS Deux, RTS Sport in Switzerland, as well as, DIRECTV Ecuador in Ecuador.

Here is an AP preview of the game.

Casual football fans scrolling down the FIFA rankings will no doubt pause when they reach No. 6.

Yet, the Swiss — with just one defeat in 18 matches over two years — are there on merit and will bid to justify their top-seed status when they open their World Cup campaign against Ecuador in Brasilia on Sunday.

Coached by wily and experienced German Ottmar Hitzfeld, Switzerland has been transformed into a bold European power driven on by blossoming players who shone at youth tournaments since 2009.

Hitzfeld’s lineup is favored — along with France — to advance from Group E that also contains Honduras.

“We do have the potential to qualify for the round of 16,” Hitzfeld said. “That is our goal. Then there are no limits.”

Ecuador, ranked No. 26, has some deficiencies in defense — long-time center-half rocks Ivan Hurtado and Giovanny Espinoza are no longer around — and has a big hole in its forward line after the sudden death of star striker Christian Benitez last year.

The 27-year-old Benitez died of heart failure in Qatar in July, only three weeks after joining local team El Jaish. He was Ecuador’s star forward with 24 goals in 58 appearances.

The desire to honor Benitez — previously described as “practically irreplaceable” by Ecuador coach Reinaldo Rueda — will drive the national team, but that may not be enough to help them progress beyond the group stage.

Another of Rueda’s top players will be missing in Brazil, too, after experienced defensive midfielder Segundo Castillo was ruled out of the tournament on Monday with a knee injury sustained in a warm-up match against Mexico. Osvaldo Minda was called up as his replacement.

The star of the team is Manchester United winger Antonio Valencia, the country’s most illustrious export who showed he is fired up to be very competitive at the World Cup by getting sent off for grappling with England winger Raheem Sterling in a friendly international last week. He won’t be suspended ahead of the World Cup games and should figure prominently on the right flank.

Ecuador should benefit from the tournament being held in South America, making them more suited to the playing conditions and potentially leaving the group wide open.

But the Swiss, buoyed by wins over Brazil and Germany in friendlies in the past two years, boast a higher-quality squad.

Xherdan Shaqiri, a bit-part player at Bayern Munich but a key performer for his country, has the ability to produce moments of brilliance and feed Josep Drmic, who is likely to be team’s lone striker in a 4-2-3-1 formation. Expect the tireless running and high-tempo game of central-midfield pairing Gokhan Inler and Valon Behrami to be a feature, too.

Switzerland scored 17 goals in 10 qualifiers and Ecuador just 20 in 16 matches — so the first match in the Brazilian capital’s Estadio Nacional is not likely to be a high-scoring encounter.