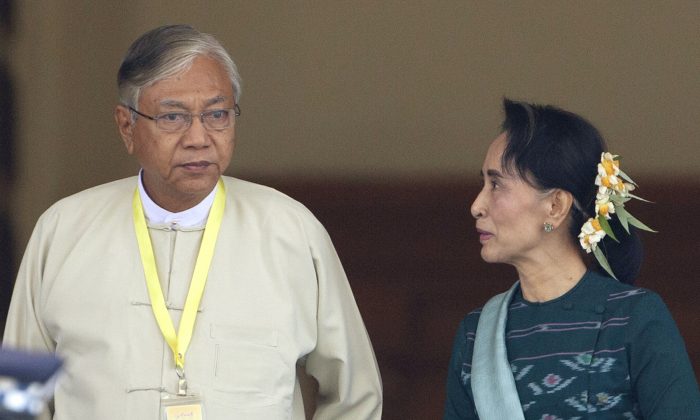 The joint session of the two houses of parliament broke into thundering applause as the speaker Mann Win Khaing Than announced the result: “I hereby announce the president of Myanmar is Htin Kyaw, as he won the majority of votes.” Immediately, the state-run Burma TV’s camera zoomed in from above on a beaming Suu Kyi, sitting in the front row, clapping excitedly, for a live nationwide audience.

A constitutional provision barred Suu Kyi from becoming president, and she made it clear that whoever sits in that chair will be her proxy.

The 70-year-old Htin Kyaw, a longtime confidant of Suu Kyi, will take office April 1 but questions remain about his position and power.

Rightfully, the job belonged to Suu Kyi, who has been the face of the pro-democracy movement and who endured decades of house arrest and harassment by military rulers without ever giving up on her non-violent campaign to unseat them. But a constitutional provision barred Suu Kyi from becoming president, and she made it clear that whoever sits in that chair will be her proxy.

Still, Htin Kyaw will be remembered by history as the first civilian president for Myanmar and the head of its first government to be elected in free and fair polls. After the parliament session ended, Suu Kyi did not comment as she exited, leaving the new president to deliver the first reaction.

“This is a victory for the people of this country,” Htin Kyaw said in a brief comment to reporters.

He secured 360 votes from among 652 ballots cast in the bicameral parliament, where the vote count was read aloud and announced by a parliament official.

“We are very satisfied with the result of the presidential election,” said Tun Win, a legislator from the Arakan National Party. “He really should be the leader. I hope he can lead this country to peace and stability, equality and implement the rule of law in this country.”

The NLD, and indeed Suu Kyi, came into prominence in 1988 when popular protests started against the military that had ruled in different incarnations since taking power in a 1962 coup. After crushing anti-government riots in which thousands of people were killed, the junta placed Suu Kyi under house arrest in 1989.

It called elections in 1990, which the NLD swept. But the military ignored the results and stayed in power.

It called elections in 1990, which the NLD swept. But the military ignored the results and stayed in power. Suu Kyi was awarded the Nobel Peace Prize a year later, and it was around this time that Htin Kyaw—then a computer programmer-turned-bureaucrat—became involved in party work. His father-in-law was already a prominent NLD leader and his wife a member.

Htin Kyaw, who had known Suu Kyi since grade school, became her confidant and adviser on foreign relations. As Myanmar lurched from one political crisis to another, Suu Kyi was released and re-arrested several times. The junta finally started loosening its grip on power in 2010, allowing elections that were won by a military-allied party after the NLD boycotted the polls as unfair.

After more reforms, another general election was held on Nov. 8 that was swept by the NLD, a reflection of Suu Kyi’s widespread public support. The constitutional clause that denied her the presidency excludes anyone from the job who has a foreign spouse or children. Suu Kyi’s two sons are British, as was her late husband. The clause is widely seen as having been written by the military with Suu Kyi in mind.

The military reserved for itself 25 percent of the seats in parliament, ensuring no government, current or future, can amend the constitution without its approval.

Myint Swe is seen as a close ally of former junta leader Than Shwe and remains on a U.S. Treasury Department blacklist that bars American companies from doing business with several tycoons and senior military figures connected with the former junta.