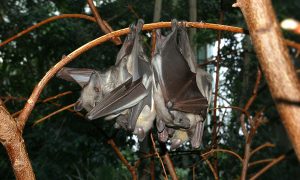 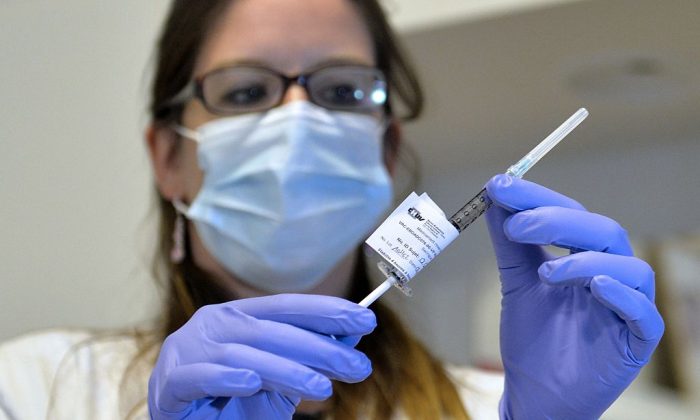 A doctor holding a syringe with an experimental Ebola vaccine manufactured on the basis of an adenovirus strain, at CHUV hospital in Lausanne, Switzerland, on Nov. 4, 2018. (Richard Juilliart/AFP/Getty Images)
Europe

Swedish health officials have said that a male patient is suspected of having contracted the deadly Ebola virus.

The unidentified patient is currently being treated at the Infectious Diseases Clinic of Uppsala University Hospital, officials said Jan. 4, according to the Independent. The individual, who reportedly had returned recently from a three-week trip to Burundi in East Africa, is said to have been quarantined after exhibiting symptoms that included vomiting blood.

In a statement cited by the Associated Press, officials in the city of Uppsala, which is north of the capital Stockholm, called the Ebola diagnosis “only a matter of suspicion.” They added that “other diseases are quite possible.”

“The patient came in Friday morning and reportedly was vomiting blood, which may be a symptom of Ebola infection,” hospital spokesman Mikael Kohler told local newspaper Upsala Nya Tidning. He wasn’t immediately available for further comment.

The individual first went to the hospital in Enköping, and was subsequently moved to the Uppsala facility. The emergency room at the Enköping hospital has been closed, because of the highly contagious nature of the virus, and staff who came in contact with the patient are reportedly being cared for.

Cases of Ebola are highly uncommon in Europe, with one case reported in Italy in 2015, one in Spain in 2014, and one in the UK the same year, according to the World Health Organization (WHO).

In Aug. 2014, British volunteer nurse William Pooley became the first Briton to contract Ebola after working in Sierra Leone, according to the Independent. Pooley was flown back to the UK for emergency treatment and recovered completely.

Parts of Africa, however, are struggling to cope with an Ebola outbreak.

The Democratic Republic of Congo is going through the second-deadliest and second-largest Ebola outbreak in history, with CNN reporting on Jan. 3, there were 600 cases.

While all major Ebola outbreaks have been in Africa, several isolated cases have been reported outside the continent.

Cases in the United States

A U.S. medic was quarantined in Nebraska on Dec. 29 for possible Ebola exposure. The worker, who may have been exposed to the virus while treating patients in the Democratic Republic of Congo, was put in quarantine after arriving in the United States, according to Reuters.

Nebraska Medicine said in a statement that the medic, who wasn’t exhibiting symptoms of Ebola, would remain under observation for up to two weeks at the University of Nebraska Medical Center in Omaha.

The Ebola virus is spread through contact with the bodily fluids of those infected. Symptoms such as fever and abdominal pain may appear up to three weeks after exposure with the virus, according to the Centers for Disease Control and Prevention.

Symptoms can appear similar to those of the flu, before the onset of vomiting, diarrhea, a rash, as well as both internal and external bleeding. According to the WHO, the average Ebola fatality rate is around 50 percent, although case fatality rates have risen as high as 90 percent in past outbreaks.

Officials at the WHO have expressed concern about whether the world’s emergency stockpile of 300,000 Ebola vaccine doses is enough to control future epidemics as the deadly disease moves out of rural forest areas and into urban mega-cities.

Outbreak response experts at the WHO and at the vaccines alliance GAVI are already talking to the leading Ebola vaccine manufacturer, Merck, to reassess just how much larger global stocks need to be.

“We’re actively engaged with the World Health Organization and with groups like GAVI, the U.S. government, and others to try to understand what will be an appropriate-sized stockpile in the future,” Merck’s head of vaccines clinical research, Beth-Ann Coller, told Reuters in a telephone interview.

While no shortages have been reported in supplies of the Merck vaccine, currently being used to fight the large and spreading outbreak of Ebola in the Democratic Republic of Congo, future stockpiles are a concern.

Peter Salama, the WHO’s deputy director-general of emergency preparedness and response, said that as the nature of Ebola outbreaks shifts to more urban settings, plans for how to contain it must adapt.

“What I’m concerned about is the medium- to long-term stockpile. The figure of 300,000 was very much based on previous Ebola outbreaks where you never really had huge numbers of cases because they were in isolated, rural, populations. But now, we increasingly see Ebola in mega-cities and towns.”

“We need to view it now as an urban disease as well as a rural one—and therefore one requiring a different order of magnitude of preparations, including vaccines,” he said.