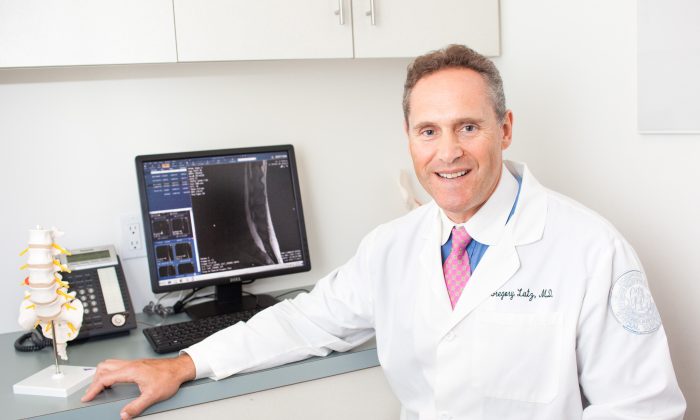 It’s a sign of a good study when the results surprise the researcher.

Dr. Gregory Lutz was not sure what to expect four years ago when he initiated a double-blind randomized controlled trial at the Hospital for Special Surgery to see whether platelet-rich plasma (PRP) therapy could help patients with chronic low back pain caused by torn discs.

The study participants were a very hard-to-treat group: people who had suffered years of low back pain, had tried all the standard nonsurgical treatments, and were facing spinal fusion surgery as their last option.

Of those who received PRP, 60 percent had significant improvements in terms of pain, function, and satisfaction. Some were cured.

“Some people were 100 percent improved. … It’s truly a cure if you can get the tear to heal,” said Dr. Lutz, physiatrist-in-chief emeritus at the Hospital for Special Surgery, with practices on the Upper East Side and Princeton, New Jersey.

PRP treatments use the person’s own blood platelets to stimulate a cascade of healing reactions.

Another surprise finding of the study was that PRP treatments worked very well for people who had two discs torn. In fact, these patients did better overall than those who had just one torn disc, the opposite of the results you’d get with spinal fusion, Dr. Lutz said.

“In a fusion, one level does better than two levels. In this procedure, two levels did better than one level, which is unusual, but speaks to the power of the treatment,” he said.

This is the first study on PRP injections in the spine. Doctors have been hesitant to use PRP in the spine because they thought PRP might not be strong enough, Dr. Lutz said. “Most investigators are focusing on the use of stem cells, but we believe our results are equal or better. PRP therapy is easier to perform since it is just a blood draw, rather than having to aspirate cells from bone,” Dr. Lutz said.

But now this study has clearly shown otherwise. Dr. Lutz has presented the findings at conferences nationally and internationally and plans to publish the research this year.

He hopes further trials will soon replicate his results and create enough evidence to get insurance to cover treatments. Currently PRP therapy is sometimes covered for other uses, but not yet for damaged discs.

PRP treatments use the person’s own blood platelets to stimulate a cascade of healing reactions.

Platelets are our smallest blood cells. They initiate the healing process by clotting together on the scene of injury and calling stem cells to come to the area to create new tissue.

The spine does not see much blood flow, so when a disk is torn platelets may not reach it, especially in older people.

When PRP is injected into the gelatinous disc center, it naturally flows into the tear in the surrounding fibrous tissue, focusing the body’s regeneration response in the right place.

“The beauty of it is that it’s really just harnessing your own innate ability to heal,” Dr. Lutz said, adding that he’s now done over 200 treatments and not had a single complication.

“There are very few things in medicine that are as safe as injecting your own cells,” he said.

Although PRP has been studied since the 1970s, it took until the 21st century for research and technology to make it possible to practice in an office setting. In the last several years, professional athletes like Tiger Woods and Kobe Bryant brought it to popular attention by crediting PRP therapy with helping them heal from injuries.

It All Started With a Horse

Dr. Lutz, who treats many professional and college athletes, first encountered PRP when one of his horses went lame and a vet injected PRP. A couple weeks later, Dr. Lutz was impressed to see the horse galloping around again.

Then an elderly patient with a torn Achilles tendon asked Dr. Lutz to try PRP. He did and was astounded to see the patient’s MRI a year later, which showed the tendon had healed completely.

“I became a believer overnight because in my 20 years of practice this was the first time I had seen this,” he said.

This, and other successes treating tendons with PRP, made Dr. Lutz think that torn spinal discs would also respond well because the part of the disc that tears is made of the same collagen fibers as tendons.

The whole procedure takes around 30 minutes. Two ounces of blood are drawn and while they spin in a centrifuge to separate the platelets, the doctor has time to give local anesthetic and prep the injection site. Then one injection and it’s done.

Afterward, patients need bed rest that day and should plan to take it easy for the next two to three days.

Maximum improvement is seen around 6 to 12 weeks, at which point another treatment can be given if needed for better results, Dr. Lutz said. However, the majority of patients improve with just one injection.

So for a fraction of the risk and cost of surgery, and with the likelihood of much better quality of life afterward, PRP and other biocellular therapies may be on track to change the standard of care for chronic low back pain.

“I think in the years to come, regenerative treatments will offer cures to previously incurable conditions that often required surgery,” Dr. Lutz said.