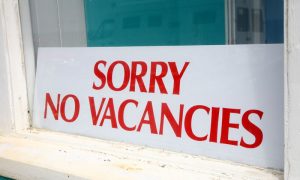 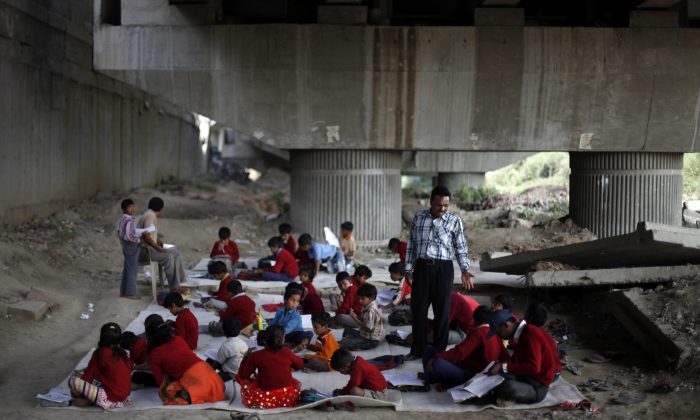 Rajesh Kumar, the founder of a free school for slum children, teaches a class at a free school for impoverished children under a mass transit bridge in New Delhi, India on March 13, 2013. Kumar fears his project is precarious. He needs more volunteer teachers because of the mass of students, but doesn't know where to find them. And his unregistered school is squatting on railroad property. "Whenever I am asked to leave this place, I will have to," he said. "Right now, the children are studying. We will take each day as it comes. As long as it remains possible, let's take advantage of it." (AP Photo/Altaf Qadri)
Health News

By The University of Texas at Dallas
biggersmaller
Print

The cognitive effects of poverty can be mitigated during middle school with a targeted intervention, according to researchers at the Center for BrainHealth at The University of Texas at Dallas.

In a paper published today in the open-access journal Frontiers in Human Neuroscience, researchers for the first time examine the efficacy of cognitive training in a large and diverse group of 7th and 8th grade public middle school students as compared to typically developing students who received no specific training.

“Previous research has shown that growing up in poverty can shape the wiring and even physical dimensions of a young child’s brain, with negative effects on language, learning and attention,” said Dr. Jacquelyn Gamino, director of the Center for BrainHealth’s Adolescent Reasoning Initiative and assistant research professor in the School of Behavioral and Brain Sciences at The University of Texas at Dallas. “What this work shows is that there is hope for students in poverty to catch up with their peers not living in poverty.”

The research team studied 913 middle school students from varying socioeconomic backgrounds, accounting for any diagnosed medical or learning differences. Five hundred and fifty six students received the cognitive intervention and 357 served as a comparison group. The protocol included pre- and post-training assessments, in which all adolescents were asked to read several texts and then craft a high-level summary, drawing upon inferences to transform ideas into novel, generalized statements, and recall important facts. For the 556 students who received the Center for BrainHealth-developed cognitive training called SMART (Strategic Memory Advanced Reasoning Training), they completed 10 45-minute sessions over a one-month period. The SMART program was provided by research clinicians and consists of hierarchical cognitive processes that are explained and practiced through group interactive exercises and pen and paper activities using student instructional manuals.

“Much focus has been put on early childhood learning and brain development – and for good reason,” said Dr. Gamino. “However, extensive frontal lobe development and pruning occurs during adolescence making middle school a prime opportunity to impact cognitive brain health.”

“Existing studies show that a large percentage of students in middle school are not developing inferential thinking entering high school,” explained Dr. Gamino. “The cognitive gains demonstrated after short-term, intensive training in this research suggest that middle school is an appropriate and beneficial time to teach students strategies to enhance understanding and the ability to infer global meanings from information beyond the explicit facts.”

Cognitive tests indicate that students living in poverty showed as much as a 25% increase in gist reasoning, or the ability to derive abstracted meaning from information presented, after training, comparable to the gains made by their peers living above the poverty line. Additionally, the SMART-trained group, regardless of socioeconomic status, showed significant generalized gains and as much as an 18% improvement in increased memory for facts, even though this skill was not specifically targeted in training.

“The ability to use inference to abstract meaning from incoming information as trained in the SMART program is a skill crucial to future life success and applies to both academic and informal learning activities such as reading a school assignment, listening and taking notes from a lecture, watching a movie or television program, or having a conversation with a friend,” Dr. Gamino continued.

Findings revealed gender differences among the students studied as well. Seventh and eighth grade girls showed significant improvement after receiving the SMART program, as did 8th grade boys, regardless of socioeconomic level. After training, 7th grade boys showed improvement in fact retention but not gist reasoning.

The Center for BrainHealth’s Adolescent Reasoning Initiative has provided training to more than 300 teachers and 30,000 teens across the country. The research team is planning to expand their study to determine if cognitive training closes the academic achievement gap by conducting longitudinal research and comparing standardized test scores.