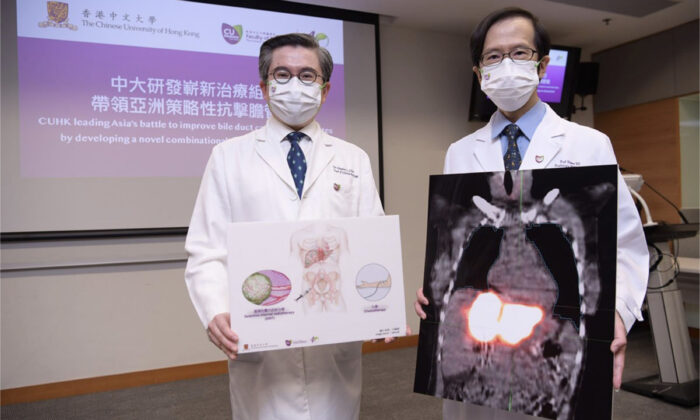 Bile duct cancer (cholangiocarcinoma) is a rare cancer, however, it is often diagnosed at an advanced stage and is not suitable for surgical treatment. The international incidence rate of intrahepatic cholangiocarcinoma has continued to increase over the past decade due to obesity and unhealthy lifestyles.

A clinical study led by the Faculty of Medicine at the Chinese University of Hong Kong (CUHK) has found that selective internal radiation therapy (SIRT) combined with standard chemotherapy can effectively treat intrahepatic cholangiocarcinoma that is not suitable for resection, increasing the median overall survival nearly by 10 months.

Common symptoms of biliary duct cancer include jaundice, abdominal pain, weight loss, and so on. It is considered a rare cancer because it only accounts for 3 percent of cancers of the digestive tract. At present, more than 80 percent of intrahepatic cholangiocarcinoma patients are diagnosed with advanced disease or metastasis and they are not suitable for surgery. Therefore, chemotherapy is the standard first-line treatment, and the median overall survival is 11.7 months.

A multi-center clinical study, in collaboration with overseas medical institutions, led by the Faculty of Medicine at CUHK found that if these patients received SIRT before chemotherapy, their median overall survival could be increased to 21.6 months.

The findings have been published in Liver Cancer, a prestigious medical journal.

This study recruited 24 appropriate patients for a clinical study. First, they would receive SIRT with “yttrium-90,” a local treatment targeting liver tumors, followed by standard chemotherapy.

Professor Stephen Chan Lam, the Principal Investigator, and Professor of Oncology, Ip’s Family Trust, Department of Oncology, Faculty of Medicine, CUHK, said that while the pharmaceutical industry is generally less interested in exploring treatment options for uncommon cancers, clinical researchers at CUHK took on the responsibility to search for better treatments for this cancer. “Our data will provide a potential new treatment option for patients whose cancer is concentrated in the liver and who are candidates for more intensive treatment.”