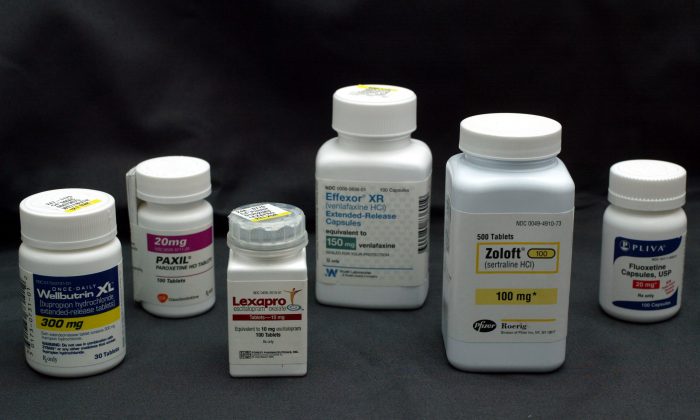 Bottles of antidepressant pills, (L-R) Wellbutrin, Paxil, Lexapro, Effexor, Zoloft and Fluoxetine, photographed in Miami, Fla., on March 23, 2004. The Food and Drug Administration (FDA) asked makers of popular antidepressants to add or strengthen suicide-related warnings on their labels as well as the possibility of worsening depression. (Joe Raedle/Getty Images)
Health

Study Defends Antidepressant Use in Pregnancy Despite Birth Defect Risks

While SSRI antidepressants are arguably still the most consumed drug class in the United States, sales peaked in 2008 and have declined by 4 percent every year since, according to Research and Markets.

There are many reasons for declining selective serotonin re-uptake inhibitors (SSRI) sales from unwanted side effects like weight gain and sexual dysfunction to “Prozac Poop-out” in which patients develop tolerance and the pills quit working.

Still, a major reason for declining sales are SSRI’s strong links to suicide and birth defects.

In 2004, the FDA added “Black Box” warnings to SSRIs, highlighting suicide risks and the need for close monitoring of children and adolescents for suicidal thoughts and behavior. Reaction from pro-drug doctors who appeared to be defending industry sales was swift. The warnings might scare away doctors and patients, they objected—as if that weren’t the point of warnings. The pro-drug voices even tried—unsuccessfully—to blame the warnings for a rise in suicides. Unfortunately, they were using data from the wrong year.

As reports of SSRI-linked birth defects began to surface more than ten years ago, a similar phenomenon occurred. In 2005, the FDA warned   health care professionals and patients that the SSRI Paxil “increases the risk for birth defects, particularly heart defects, when women take it during the first three months of pregnancy.” The next year, doctors writing in the Journal of the American Medical Association (JAMA) countered that women who went off their antidepressants during pregnancy would “relapse” in their depressions. The authors, it turned out, had 60 financial relationships to pharmaceutical companies and the lead author was a paid speaker for seven drug makers. JAMA was forced to publish a correction.

Since then, the birth defect warnings have only increased. In 2012, a prominent study in the Journal of Clinical Psychiatry found an association between SSRIs and the heart-related disorder “persistent pulmonary hypertension” in newborns. Last year, ABC News reported a study of thousands of pregnant women who took antidepressants that found an increase in birth defects.

But this May, pro-drug researchers have again disputed the risks. Untreated maternal depression they write, meaning depression treated with no SSRIs, increases the “likelihood of preterm and very preterm delivery as well having an SGA [small-for-gestational-age] neonate.” The risk “was not apparent among women who were treated with an antidepressant medication,” they write.

The researchers do not hide the fact that they are trying to counter birth defect fears. “Although this [pregnancy benefits] finding might seem self-evident in light of the other compelling reasons for depression treatment, the persistence in the mass media of experts claiming otherwise suggests the need to demonstrate such benefit,” they write. As many as 75 percent of 200,000 Medicaid recipients “discontinued treatment before or during the first trimester of pregnancy given persistent concern about the safety of antidepressants during pregnancy,” they note.

The researchers end their article with a call for screening. “Our results provide additional support for greater public health and clinical efforts aimed at universal screening for maternal depression during pregnancy as a means of identifying individuals at greater risk for adverse obstetric outcomes. They further suggest the possibility that intervention for depression may provide an opportunity to moderate such risk,” they write.

While it sounds like the researchers are only concerned about public health and women needlessly suffering, many medical professionals and journalists have reported that screening and intervention are often drug company sales tools. In “How We Do Harm,” Dr. Otis Brawley, chief medical and scientific officer of the American Cancer Society and an oncologist, devotes a chapter to how prostate screening is often done for money and the sometimes disastrous results.

The now defunct TeenScreen which screened young people for early signs of depression had “ties to the pharmaceutical industry,” reported the Scientific American.

As we see are now seeing with the Zika virus, “no amount of birth defect risk is acceptable.” Pro-drug researchers who imply otherwise are highly irresponsible.