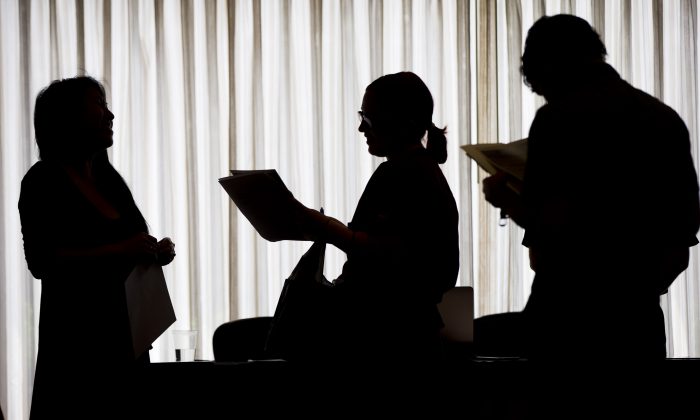 NEW YORK—The Department of Labor reported that the economy added 215,000 jobs last month, well below the 260,000 monthly additions posted a year earlier, and new employment opportunities and wage gains will continue to be depressed for the balance of this year and next.

Previously the Commerce Department reported that gross domestic product grew 2.3 percent in the second quarter. That figure will likely be revised up to 3 percent, but stronger economic growth isn’t translating into a more encouraging labor market.

China, Japan, Germany, and South Korea target the value of their currencies against the dollar through direct central bank intervention or explicit limits on inward foreign investment. Those jurisdictions domicile the principal competitors for U.S. exports and import competing industries.

But for the overvalued dollar, the U.S. economy could add some 4 million jobs directly in manufacturing and through multiplier effects in the services that more highly paid factory workers would purchase.

With the dollar overvalued, the strongest remaining area for potential jobs growth is in high-value-added manufacturing, for example, in advanced materials and metallurgy, chemicals, aircraft and components, advanced electronic components, robotics, and makers of equipment such as numerically controlled machine tools.

Along with logistics and supply chain management, those industries need more workers with skills in process controls, computer programming, and the like that have a year or two of post-high school training.

Most of those specialties are in short supply because opportunities for training are limited and many young people shun blue-collar careers. Instead, they enroll at colleges hoping to land professional employment.

Unfortunately, the economy has more college graduates than it needs, as witnessed by the many underemployed at Starbucks and similar venues.

Many white-collar jobs, especially those that can be performed offsite and through computer terminals, can be moved and performed abroad, such as back room operations for banks and retailers.

The H-1B visa, which is intended to facilitate immigration of skills in short supply, is abused to bring lower-paid foreign workers here.

Disney recently fired 250 American workers who tracked ticket sales, store purchases and the like at Walt Disney World in Orlando, Fla. But the folks who run the Magic Kingdom first required those Americans to train their foreign replacements to obtain severance benefits.

The historic pace of annual productivity growth is close to 2 percent, but thanks to West Coast port slowdowns, a severe winter and lower oil prices, worker productivity fell a lot last fall and winter. Consequently, businesses have thousands of underutilized employees, and they will be able to serve more rapidly growing demand by realizing untapped opportunities to get more out of existing workers.

Business balance sheets are remarkably stronger than in recent years. Although many companies have used extra cash to buy back stock and raise dividends, quietly, many have purchased new equipment and software to tighten supply chains and sharpen execution.

Investments for these purposes relative to depreciation have been stronger than during the boom years of the past decade, and stronger productivity growth is likely.

All this paints a picture of a more robust American private sector, even if it is blemished by a strong dollar and labor shortages in key areas that constrain what it can deliver. Most workers will continue to face tough competition for good-paying jobs.

Wages, after adjusting for inflation, remain stagnant, because good-paying job openings go vacant for lack of qualified applicants, while an army of lower-skilled workers in the fast-growing service sector pulls down the average wages.

Expect jobs growth to remain at about 215,000 per month and wages to barely keep up with inflation.