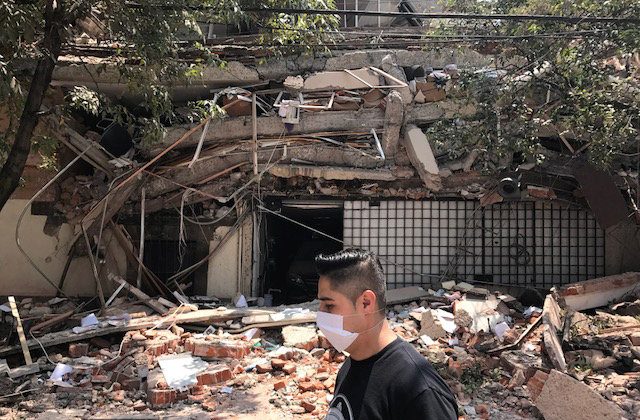 Damages are seen after an earthquake hit in Mexico City, Mexico on Sept. 19, 2017. (REUTERS/Carlos Jasso)
Americas

TV images showed a multi-story building in the capital with a middle floor collapsed as sirens blared from first responders rushing to the scene. Other video showed the side of a government building sheering off and falling into the street as bystanders screamed.

In Cuernavaca, a city south of Mexico City, there were unconfirmed reports on local radio of people trapped beneath collapsed buildings.

The quake came just over a week after another major quake shook the country. A civil protection official told local TV that an unspecified number of people were trapped inside various buildings that caught fire in Mexico City.

Mexican TV and social media showed cars crushed by debris. Many people fled into the streets, and electricity and phone lines were down in parts of the capital.

“We got out really fast, leaving everything as it was and just left,” said Rosaura Suarez, as she stood with a crowd on the street.

Tuesday’s epicenter was located 5 miles southeast of Atencingo in the central state of Puebla at a depth of 32 miles, the U.S. Geological Survey said.

The quake hit only hours after many people participated in earthquake drills around the nation on the anniversary of the devastating quake that killed thousands in Mexico City in 1985.

Many people were also still shaken from the recent quake on Sept. 7, a powerful 8.1 temblor that killed at least 98 people.

President Enrique Peña was on a flight to Oaxaca, one of the hardest hit areas by that quake, and said via his Twitter account that he was immediately returning to attend to the quake in Mexico City.