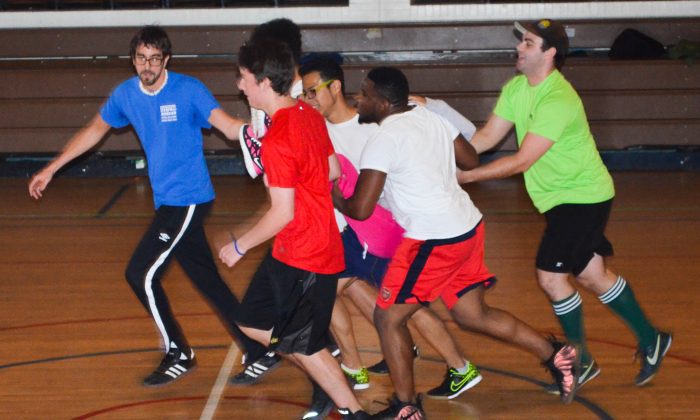 “We are using soccer as a tool of social transformation,” Wilson said.

Young people ages 13 to 17 from around the county gathered at the Middletown Recreation and Parks Department on Nov. 15 to take part. The Orange County Department of Social Services has contracted with YAP to work with youth in the juvenile justice system and in the welfare system.

FuDe’s Lucas Ferraro and Dario Romero worked with translator Lisa Solmirano to show how street soccer, the most popular sport among young people in Argentina, reduces the chance of violent interactions in the real world.

The games are meant “to have everybody come together,” Solmirano said.

The activities began with the young people playing fun games, doing relay races, and shouting exercises, much in the way that athletes prepare themselves for a game.

Wilson said the formal games start with a mediation, where trainers help the kids determine the rules for the game. Wilson said this is a way to empower them. “For most of these kids, their whole life has been people telling them what to do. They don’t have any choice, access, or ownership.”

The FuDe trainers work with the YAP staff on how to be effective mediators, “how to quietly observe the game to make sure the rules are being agreed upon and respected,” said Wilson. The goal is to have the young people play with others in a respectful, cooperative way.

Sean Cunningham, who coaches girls’ junior varsity soccer in Minisink, observed the games. He coaches club teams for girls from the age of eight to high school. Cunningham said boys and girls play soccer about the same “but there is a different level of intensity. Girls are very intense about the game, about their positioning, about their play. To them it’s a very serious thing.”

He says he tries to install the same values of bonding and teamwork as FuDe. “When they are working as a team, it’s great.”

The event continued the next evening at the Middletown Elks Lodge with supporters, including Justin Rodriguez representing the county executive, Rachel Wilson, executive director of the county’s youth bureau, Superintendent of Recreation, Christine Brinckerhoff, and a team from Ireland also attending to learn from FuDe.

The U.S. has an estimated 10 million kids playing soccer. The Street Soccer Movement draws kids of all abilities and income levels and provides basic tools of the game, a few balls, and a moveable net. The kids are allowed to play with their own rules and learn how to be a team.

Rachel Wilson supported the goals and results of the movement. “Not only do participants increase their abilities in the technical aspects of the sport, they are also practicing valuable character building skills like mutual respect and communication.”

Children learn core values in competitive play—patience, to wait their turn, and that they are not entitled to lead, make decisions, or even be listened to simply because they show up.

The strength of street soccer is that it is played daily in a competitive form in small groups and on all kinds of street playing fields. In the informal play, young players learn from their mistakes and unconsciously acquire the technical, tactical, mental, and physical qualities through scrimmage.

The movement began in Buenos Aires 20 years ago in poor neighborhoods to reduce violence and gang activity. Children learn core values in competitive play—patience, to wait their turn, and that they are not entitled to lead, make decisions, or even be listened to simply because they show up. Leadership is earned through team play.

Unlike a formal team sport, a street soccer team can lose this morning and win in the afternoon. “Disappointment is only temporary and is forgotten within minutes of the end of the match,” according to legendarystreetsoccer.com.

YAP joined the Street Soccer Movement in 2014, and staff attended two international events in Brazil and Argentina last May.

The nonprofit operates throughout the country and in about 20 counties in the state. According to its website, “YAP delivers individualized direct services to families involved in the child welfare system that focus on safety and develop positive connections to the community.”

The organization does early intervention to minimize placement of children outside their home with parental engagement and support.

“The street soccer model is a great example for how a program can offer youth the opportunity to gain valuable life skills that actively engage them through the Positive Youth Development approach,” Rachel Wilson said.