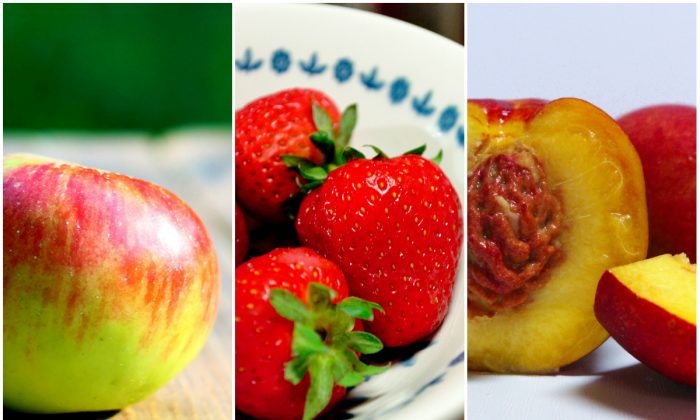 Apples, strawberries, and nectarines were the top three fruit that contain the most pesticide residue, according to an EWG report released April 12. (www.tOrange.biz/Flikr, Dave Crosby/Flikr, travel oriented/Flikr)
Mind & Body

Strawberries Contain the Most Pesticide Residue of 50 Grocery Items

For the first time, strawberries top the 2016 list for containing the highest amount of pesticide residue among 50 popular fruits and vegetables.

Each year, the Environmental Working Group (EWG) analyzes pesticide residue data from the U.S. Department of Food and Drug Administration (FDA) and ranks the produce accordingly, popularly known as the “Dirty Dozen.”

Interestingly, in the berry realm, raspberries came in way down the list at No. 23. Imported blueberries scored better (No. 19) than domestic blueberries (No. 14), so it’s safer to buy the imported variety of this superfood.

Key Findings From the 2016 Report

“Americans eat nearly 8 pounds of fresh strawberries a year—and with them, dozens of pesticides, including chemicals that have been linked to cancer and reproductive damage or are banned in Europe,” according to a statement by EWG’s Bill Walker and Sonya Lunder.

In California, where most domestic strawberries are grown, each acre is treated with 300 pounds of pesticides, according to EWG.

5 Food Scraps We Should Actually Be Putting in Our Meals

Nearly three-fourths of the 6,953 produce samples tested by the U.S. Department of Agriculture in 2014 contained pesticide residues, according to the EWG website.

The group’s “Clean Fifteen” can be used by consumers who are looking for the least pesticide-tained food. Of course, organic food is always the safest to eat.

The items are listed from the highest amount of pesticide residue (strawberries) down to the lowest (avocados).