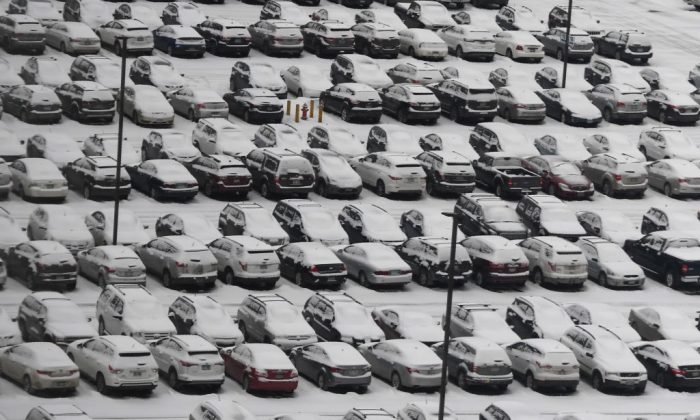 Cars park at an airport Park N' Fly, are covered in snow in the area around the airport in Bloomington, Minnesota Feb. 3, 2018 leading up to Super Bowl LII. (Timothy A. Clary/AFP/Getty Images)
US News

Storm Barrels Through U.S. Midwest With Snow and Frigid Temperatures

MILWAUKEE, Wis./CHICAGO—A major winter storm barreled into Chicago and Milwaukee early on Friday, dumping heavy snow and dropping temperatures well below freezing as it forced schools to close and threatened to leave travel at a stand still across the Midwest.

The storm system stretches from western Montana across the Dakotas and parts of Minnesota, Wisconsin, and Illinois, and reaches as far east as southern Michigan. The storm could drop up to 14 inches (36 cm) of snow in some areas, the National Weather Service said.

Chicago was anticipating six to 12 inches of snow early on Friday morning with more snow expected over the weekend, according to the service’s weather forecast.

“The city is ready for this,” Chicago Mayor Rahm Emanuel said during a news conference about the city’s preparedness on Thursday. “Make no mistake though, this is a heavy snow, heavier than we’ve seen in a number of winters.”

City officials announced school closures in Chicago, Detroit, and Milwaukee because of the weather.

Wind chill temperatures were expected to drop below 0 Fahrenheit (-18 C) in many areas across the region, and officials warned of limited visibility on roads.

Chicago’s O’Hare and Midway international airports canceled more than 200 flights on Thursday before the storm hit, and several airlines were also anticipating delays or cancellations.

United Airlines said on Twitter that waivers were in effect for snow-hit areas this week allowing travelers to change flights without charges, and Delta Air Lines offered to rebook flights on Friday for 18 Midwest cities.

Winter weather across the United States this week killed several people in accidents in the Midwest, including six in Iowa, two in Missouri, and one in Montana, local media in those states reported.