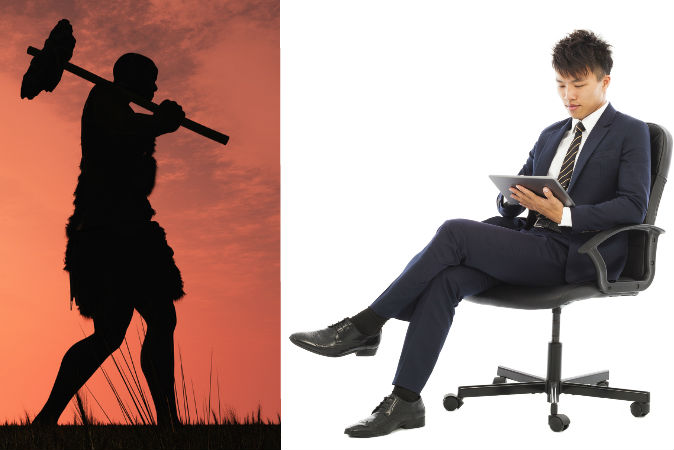 Illustration of a man from the Stone Age. (Shutterstock*) The modern life style may bring us some advancements in health technology, but we still have something to learn from our Stone Age ancestors. (Tomwang112/iStock/Thinkstock)
Health

How can we help to improve the health care system? Politicians and others continue to debate this issue. They always conclude that more money is the answer. But this approach is doomed to failure. How can it work when it’s taken 40,000 years for humans to get into such horrible shape?

How did it happen? And is there a solution?

Dr. Barry Bogin is a professor of anthropology at the University of Michigan. He says we all envision our Paleolithic ancestors as being short, bent-over people with small brains, but actually, they were a tad taller and with brains as large as ours. And if alive today, they would not require hospitalization for so much degenerative disease.

Admittedly, most stone-age people did not live as long as today’s North Americans. Large numbers died while hunting animals or from infection due to lack of antibiotics. Others suffered terrible deaths from childbirth.

But the ones that escaped these problems did not face cardiovascular disease, diabetes, hypertension, or obesity—all of today’s big killers—later in life.

What protected them? Ironically, it was the things they lacked that saved them. Three meals a day were never guaranteed, so they had to continually exert themselves to find food.

Stone-age people lost 1,600 calories by hunting and gathering food. This, along with the absence of fast-food outlets and supermarkets, kept them thin, a major factor in preventing degenerative disease.

Nutritional anthropologists can pinpoint what stone-age people ate—and how their nutrition safeguarded them from certain diseases—by analyzing their bones and fossilized human waste.

Possibly, their major protection was the lack of sugar. The only source of pure sugar was honey, which was not easy to get and only available in certain areas a few months of the year.

Today, we consume 20 teaspoons of sugar daily, which translates into 146,000 calories a year and 42 pounds of body fat if it’s not burned up by exercise.

Stone-age people also lacked excessive sodium. They consumed about 1,000 milligrams of sodium daily. Today, we use from 4,000 to 6,000 milligrams every day, mostly from supermarket foods. This is one reason why hypertension is a leading cause of death.

Paleolithic men had phenomenal good luck. They consumed up to 150 grams of fiber daily due to a diet rich in plant food. This triggered large soft stools and prevented constipation, diverticulitis, and possibly colon cancer. North Americans consume a mere 15 grams of fiber daily.

Dr. Bogin says they were also not exposed to saturated fats, the type linked to coronary disease. It’s estimated that the American public devours 200 hamburgers every second.

Paleolithic people didn’t eat significant amounts of saturated fat even in areas where game was abundant. The bison, which roamed the prairies, were thin, and what fat they contained was largely unsaturated fat. In fact, Dr. Bogin claims some of their fat consisted of omega-3 fatty acids, the kind found in fish.

Nor could thirsty stone-age people run to the corner store for a 10-ounce can of soda loaded with 8 teaspoons of sugar. Neither had they learned to ferment grains and grapes. Without alcohol, they escaped some cancers. All they had was calorie-free water, no doubt cleaner than today’s drinking water.

Paleolithic people also escaped osteoporosis. This, in spite of the fact that cows and goats were not herded for dairy products. But their plant foods were so high in calcium that they averaged 1,900 milligrams of calcium a day.

We can learn from our ancient ancestors by eating whole-wheat bread and bran cereals, adding more fruit and vegetables to our diet, drinking milk, and above all, saying no to drinks laden with sugar. And if we rise out of our chairs more often, maybe then we could control the escalating costs in health care.

Gifford-Jones, M.D., is a medical journalist based in Toronto. His website is DocGiff.com. He may be contacted at Info@docgiff.com.

*Illustration of a man from the Stone Age via Shutterstock