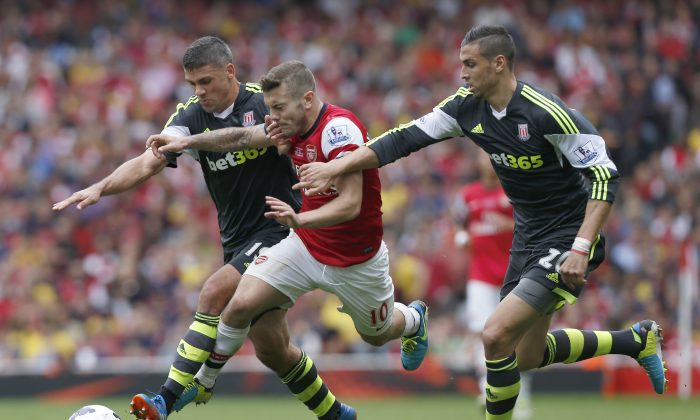 The game will be played at Craven Cottage.

Here’s where you can catch the game:

Stoke City’s Jon Walters is expected to make his return from injury, but Peter Odemwingie is still doubt for Saturday’s clash, according to Express.

Arsenal’s long-injured defender Thomas Vermaelen should return to face Stoke, and could deputize in left-back, given injuries to left-backs Kieren Gibbs and Nacho Monreal.

After Wednesday’s 0-2 UEFA Champions League defeat to Bayern Munich, Arsenal will need this win to boost their confidence and stay in the close run race space for the Premiership’s top spot. $71 m (£42.4 m) creative midfielder Mesut Ozil comes back under the spotlight after a string of sub par performances, including a glaring penalty miss against Bayern.

Stoke may have eschewed their direct long-ball style under former manager Tony Pulis and play more of a passing game under incumbent Mark Hughes, but they are still a tough, industrious, and unforgiving side. Having only won once in their last 10 matches (a 2-1 victory at home against Manchester United on Feb. 1), Hughes men will look to better their win record.