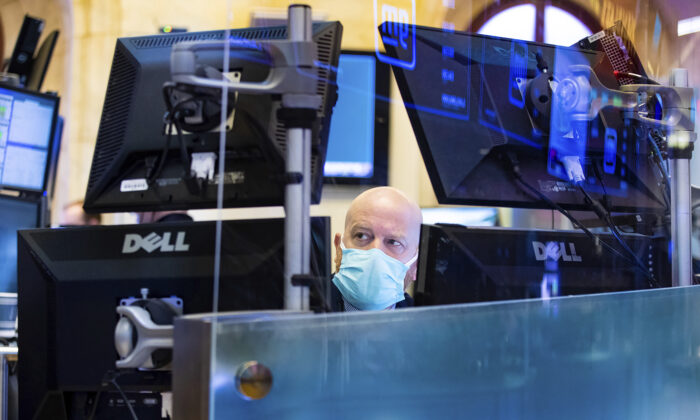 Another wobbly day of trading on Wall Street ended with more gains for stocks Wednesday, as the latest batch of company earnings reports kept investors in a buying mood.

The S&P 500 rose 0.9 percent after having briefly dipped into the red in the early going. The Dow Jones Industrial Average rose 0.6 percent and the Nasdaq added 0.5 percent. The latest gains have the indexes on pace for solid gains this week.

About three-fourths of the companies in the benchmark S&P 500 index rose, led by communication services and technology stocks. Health care companies also accounted for a big share of the gains. Big retailers and other companies that rely directly on consumer spending fell. Amazon slid 0.4 percent and Gap fell 3.3 percent.

Most of the companies that have reported results for the last three months of 2021 have delivered earnings and revenue that topped Wall Street’s forecasts, despite the higher costs they face due to rising inflation.

Bond yields fell. The yield on the 10-year Treasury fell to 1.77 percent from 1.80 percent late Tuesday.

Inflation remains a key concern as rising costs threaten profit margins and put more pressure on consumer spending. The Federal Reserve intends to raise interest rates to try cooling inflation, which is at a four-decade high. Investors expect the first rate hike in March and at least three more in 2022.

Investors are reviewing the latest round of corporate earnings to gauge the damage that rising costs have had on different industries and how companies will deal with inflation moving forward.

“You’re seeing strong demand in technology from companies continuing to drive productivity and overcome supply challenges and overcome labor shortages,” Hainlin said. “Companies don’t do that if they’re terribly worried about the economy tipping into recession.”

With about 40 percent of S&P companies having reported quarterly results so far this earnings season, about 64 percent have posted earnings and revenue that topped analyst estimates, according to S&P Global Market Intelligence.

PayPal slumped 24.6 percent, its worst trading day since it split from eBay in 2015 after reporting a weak quarter and subdued guidance.

Several big companies will release earnings later this week, including Amazon.com and Ford.