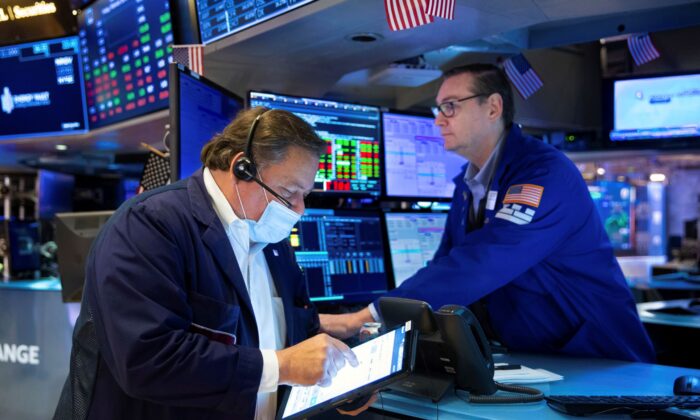 Stocks capped a week of volatile trading on Wall Street with a broad sell-off Friday that left the major indexes with their second straight weekly loss.

The selling lost some momentum into the afternoon, but the intensified again in the final hour of trading. The S&P 500 and the Dow Jones Industrial Average each fell 0.7 percent. The Nasdaq composite bore the brunt of the selling, however, shedding 1.2 percent.

Treasury yields fell as investors shifted money into the safety of U.S. bonds. The yield on the 10-year Treasury, which affects rates on mortgages and other consumer loans, fell to 1.93 percent from 1.97 percent.

Markets have been turbulent all week as investors watch the latest developments in Ukraine, where Russia has been amassing troops on the border. The tensions are yet another concern for investors as they try to determine how the economy will react to rising inflation and looming interest rate hikes.

And then there’s the uncertainty of what could happen in Ukraine during this holiday weekend, with U.S. markets scheduled to be closed Monday in observance of President’s Day.

“You’re heading into a long weekend with no resolution on Russia or Ukraine, so you have some people just going to the sidelines a little bit,” said Tom Hainlin, national investment strategist at U.S. Bank Wealth Management.

Tensions over Russia and Ukraine have been growing all week, throwing a curveball to markets that have been more focused on inflation, central banks’ monetary policy and economic growth. The United States has issued some of its starkest, most detailed warnings yet about how a Russian invasion of Ukraine might unfold, and its Western allies went on high alert for any attempts by the Kremlin to create a false pretext for a new war in Europe.

Russia is a major energy producer and a military conflict could disrupt energy supplies and make for extremely volatile energy prices.

Inflation remains a key concern for Wall Street as companies continue facing supply chain problems and higher costs, prompting warnings that operations will suffer through some or all of 2022. General Electric fell 5.9 percent after it warned that pressure from inflation and supply chain problems have hurt several of its businesses including healthcare, renewable energy and aviation. It expects the problems to persist through at least the first half of the year.

Weakness from several big technology stocks, which have more weight on indexes because of their size, helped pull the broader market lower. Intel fell 5.3 percent.

Companies viewed as less risky investments, such as utilities, held up better than the rest of the market.

Investors remain focused on the Federal Reserve and its plan to raise interest rates in order to fight rising inflation. The latest minutes from a meeting of policymakers from the Fed confirmed that the central bank intends to move decisively to fight inflation with higher interest rates. Wall Street is trying to look ahead to determine how a more aggressive monetary policy from the Fed will impact markets, especially after years of ultra-low interest rates more supportive policies.

Federal Reserve Bank of New York President John Williams said Friday that the central bank should start raising interest rates next month to help rein in too-high inflation. But he added that the rate hikes may not have to begin with as big a bang as some have suggested.

“Personally, I don’t see any compelling argument to take a big step at the beginning,” Williams said following an event at New Jersey City University to discuss the economy and interest rates.