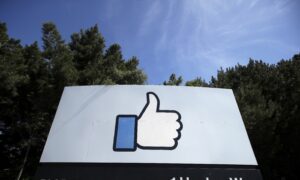 The logo of U.S. social network Twitter displayed on the screen of a smartphone and a tablet in Toulouse, southern France, on Oct. 26, 2020. (Lionel Bonaventure/AFP via Getty Images)
Censorship & Socialism

Bill Richmond, lawyer of conservative talk show host Steven Crowder, is considering a lawsuit against Twitter, saying the social media company’s suspension of Crowder’s account amounts to anticompetitive behavior and false advertising because Crowder has yet to be given a reason for the suspension.

Crowder was blocked from accessing his Twitter account with 1.2 million followers on March 9 because it “violated Twitter Rules,” according to an image of an email from Twitter that Crowder presented during his March 11 show.

The email included a line saying “Specifically For:” followed by a blank space.

Crowder received a notice that the account would be reinstated in about 12 hours, but the next morning, the notice said the suspension was to last another “6 days and 9 hours.” Three hours later, the notice changed to “6 days and 21 hours,” Richmond said, presenting images of both notices. That evening, the countdown stopped for a few hours at “6 days and 10 hours” before resuming again.

Crowder received two more emails from Twitter, with each leaving the reason for the suspension blank, Richmond said.

“We’ve sent multiple legal notices, we went through every platform of appeal that’s available,” he said. “This is what they say. They go, ‘Well, there’s always a way to be able to appeal it within the system.’ No. Not actually true. But we went through and we found other ways to be able to do it. We’ve contacted their legal department directly. We’ve contacted their Trust and Safety department, actually, directly. And to this moment, until right before [the show went] on air, still no response at all. They haven’t even given us the reason at all.”

Richmond said Twitter hasn’t left him much other recourse besides suing.

“The legal system should be the last resort and unfortunately, Twitter is essentially pushing us to say, ‘You better go to the last resort,’” he said.

Crowder previously ran into issues with Twitter for showing that some Nevada voters are registered at invalid addresses, such as empty lots. It isn’t clear, however, what the current suspension may have been about. Twitter didn’t immediately respond to a request for comment.

Crowder said his Nov. 3 election livestream was cut off in the midst of his coverage. Crowder said he was never provided a reason for why the stream was taken down.

“Ya’ll set the rules however you want to set them, but if you’re going to advertise and draw in consumers from the entire United States, the entire world, creators, people who are advertising, and say, ‘we enforce our policies in a certain way,’ and then you don’t actually follow your own rules, that is anti-competitive, you’ve got one media company trying to hurt another media company, and it’s deceptive,” he said.

“Every time they do one of these things, they go, ‘Well, you know, a sub of a sub of a subcontractor gave it to his cousin’s dog and, like, he hit the wrong button.’ But they did the same thing with the sitting president, they’ve done this thing across the board,” he said.

“They’ve had multiple instances of their inability to handle the kind of issues that are endemic to running a large platform. Essentially, what they’re proving, day in and day out, is that they can’t uphold their own policies at scale. Which means, if they can’t hold the power responsibly, they can’t have the power. They need to be held responsible. This kind of bad faith action is exactly what isn’t protected by Section 230.”

Section 230 is a law that shields online platforms from liability for 3rd party content as well as for “any action voluntarily taken in good faith to restrict access to or availability of material that the provider … considers to be obscene, lewd, lascivious, filthy, excessively violent, harassing, or otherwise objectionable.”

There’s a push from among Republicans and Democrats to rewrite the law, while some states are trying to counter online censorship by sidestepping it.