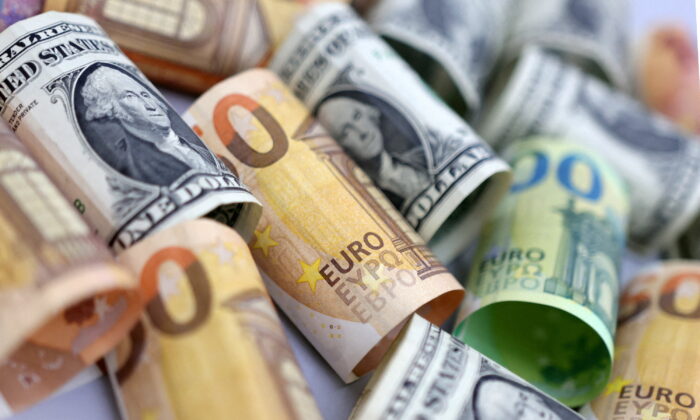 SINGAPORE/TOKYO—The dollar gained ground against the euro and sterling on Thursday after earlier hitting a 24-year peak against the Japanese yen, as investors positioned for higher U.S. interest rates and remained concerned about the health of European economies.

The euro slid 0.37 percent to just hold above parity against the dollar at $1.10016, while the pound hit a fresh two-and-a-half year low of $1.15545 down around 0.5 percent, as the safe-haven dollar was supported by moves away from riskier assets.

“Even after hitting fresh records, USD strength has scope to extend somewhat further, boosted by the global slowdown and the European energy crunch in particular,” said analysts at Generali Insurance Asset Management.

Manufacturing activity across the eurozone shrank for a second month in August, according to a survey, mirroring a slump in factory activity around the world, and while European energy costs have softened slightly this week, they remain at highly elevated levels.

“The main driver remains rate differentials between Japan and the U.S., and even today’s price action just follows the overnight move higher in U.S. rates. We think the path ahead is going to depend on how U.S. rates behave,” said Sosuke Nakamura, a strategist at JPMorgan in Tokyo.

Expectations for a 75-basis-point U.S. rate hike at next month’s Federal Reserve meeting are rising on the back of solid economic data, with Fed funds futures last pointing to around a 75 percent chance of such an increase.

A senior finance ministry official said on Thursday that Japan was watching currency moves with a “high sense of urgency.”

The risk-sensitive Australian and New Zealand dollars also sold off as part of the move towards safe haven assets and hit their lowest levels since July.

Bitcoin which, too, trades in line with risk sentiment, was slightly softer, trading a fraction under $20,000.

By Rae Wee and Kevin Buckland