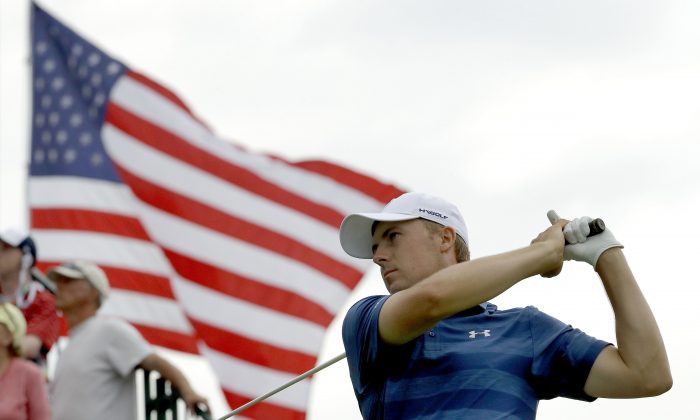 FILE - In this June 16, 2016, file photo, Jordan Spieth watches his tee shot on the third hole during the first round of the U.S. Open golf championship at Oakmont Country Club in Oakmont, Pa. Spieth is out of the Olympics. International Golf Federation president Peter Dawson announced the decision at the British Open. Spieth had been strongly debating whether to go over the last three days before reaching his decision on Monday, July 11, 2016. He will be replaced by Matt Kuchar. (AP Photo/Charlie Riedel, File)
Golf

TROON, Scotland—Jordan Spieth withdrew from the Olympics on Monday, leaving golf without its top four players when the sport returns to the games for the first time since 1904.

Spieth was the last of the top players to say he wasn’t going to Rio, telling the IGF it was out of health concerns. It was the latest blow to a sport that had lobbied hard to get back into the Olympics and had the support of the top players until fears arose over the Zika virus, security and other issues facing the Rio Games.

“There is no doubt that the number of withdrawals hasn’t shed golf in the best light, and we have to accept that,” said Peter Dawson, president of the International Golf Federation.” But we do understand why these individual decisions have been taken.

“Personally, I think there’s been something of an overreaction to the Zika situation, but that’s for individuals to determine, and there’s certainly a great deal of concern about this issue inside the game of golf, no doubt about that.”

Jason Day, Dustin Johnson and Rory McIlroy previously withdrew, all citing the Zika virus. Day and Johnson have said they plan on having more children, while McIlroy is engaged and said he would soon be starting a family.

Spieth was playing a practice round at Royal Troon ahead of the British Open and was not expected to speak until Tuesday. When he finished, he went back toward the gallery to sign autographs, then left on the other side of the green toward the parking lot.

Men’s golf still has eight of the top 15 players in the world competing in Rio, though losing the top four could be a big setback in its bid to stay in the Olympic program. It is assured of being part of the Tokyo Games in 2020, but the International Olympic Committee votes next year to decide whether golf and other events stay beyond that.

The Americans still have four players in Rio, the most of any country. Spieth was replaced by Matt Kuchar, who narrowly reached No. 15 in the world two weeks ago with a tie for third in the Bridgestone Invitational. The other Americans are Bubba Watson, Rickie Fowler and Patrick Reed.

Spieth was enthusiastic about the Olympics until about a month ago, when he started to mention security, Zika and other concerns. Johnson pulled out Friday, and Spieth was said to be struggling with his decision until Monday.

Will Olympic Athletes in Rio Be Safe From Zika?