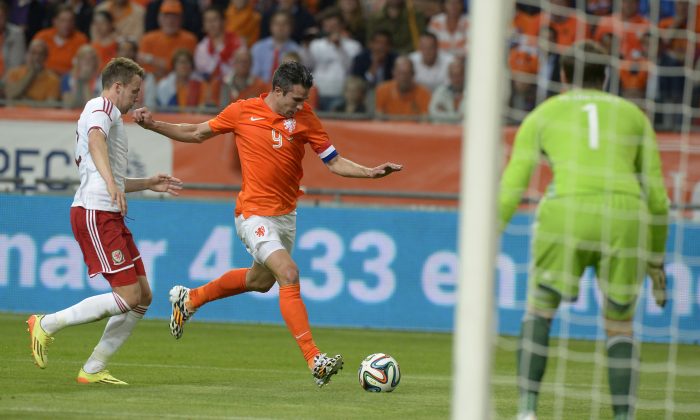 After being out with a right thigh muscle injury for a spell, Costa is now fit to play, and will join his new Spain teammates Xavi Hernandez, David Silva and Andres Iniesta to take on the Netherlands in a rematch of the 2010 World Cup final.

Here are the line ups for the match:

Here is an Associated Press article on Spain.

VALENCIA, Spain (AP) — At the height of Spain’s crushing economic crisis, the Villarreal soccer club sported an eye-catching logo across its jerseys: Aeroport Castello. The local government paid the club 20 million euros ($27 million) to promote what was to become Spain’s most notorious “ghost airport” — one that hasn’t seen a single flight since it opened in 2011.

The deal illustrates one of the peculiarities of Spain’s meltdown: As austerity measures sap the life from health, education and welfare programs, Spain’s soccer teams have been receiving hundreds of millions of dollars in government aid.

An Associated Press review of official documents shows that Spain’s highly autonomous regions are helping to keep some teams alive through massive direct cash injections. Some politicians and ordinary Spaniards are questioning the generous support amid hospital downsizing, teacher layoffs and chronic delays in payments for needy people.

The 20 clubs in Spain’s top soccer league, one of the world’s best, received at least 332 million euros in direct public aid between 2008 — the beginning of Spain’s financial meltdown — and 2012, according to the AP review. The funds were allocated through public agencies and companies run by the country’s 17 regional governments. In the same period, the clubs also benefited from an additional 476 million euros in indirect aid, such as allowing clubs to run up tax and social security debts.

That makes the total 810 million euros in the years reviewed — $1.1 billion.

“Soccer puts the fear of God into politicians who worry that people will be up in arms about the possible disappearance of their club,” said Sandalio Gomez, a sports management expert at the IESE Business School in Madrid. “They find ways of getting money to the clubs without which (the clubs) would not survive.”

The government says soccer subsidies are simply part of a policy of supporting sports around the country. Miguel Cardenal, president of the Spanish government’s Superior Sports Council, said authorities have made a serious effort to ensure proper financial management at soccer clubs.

“It makes no sense to cast aspersions about public sponsorship that hasn’t been questioned, and which — if it were — would have a perfectly logical explanation,” said Cardenal, whose organization is Spain’s top sports body.

Ten of the 23 members of Spain’s national team — the reigning champion playing its opening World Cup match Friday — belong to those clubs. So do many of the World Cup’s other biggest stars; Brazil’s Neymar, Portugal’s Cristiano Ronaldo and Argentina’s Leonel Messi all draw their salaries from clubs being investigated, though the great bulk of their income comes from sponsorship deals rather than government subsidies.

But that’s just a part of government assistance to Spain’s soccer league, according to the AP review.

The largest case of government subsidies for soccer teams can be found in the city of Valencia, on Spain’s eastern seaboard. The AP review found that over the 2008-12 period, the Valencia region pumped 169 million euros into its four top-flight soccer clubs — Valencia, Elche, Levante and Villarreal.

In one of the most striking cases, Villarreal entered into two sponsorship contracts to advertise Spain’s notorious “ghost airport” on its team jerseys. The publicly owned airport, just an hour’s drive from the city’s other airport, opened in March 2011 at a cost of some 150 million euros, making it an emblem of Spain’s wasteful public spending. The advertising deal provided the team with almost 20 million euros between 2008 and July 2011.

Meanwhile, Valencia laid off more than 5,000 teachers while making deep budget cuts between 2009-12. Those who kept their jobs have taken pay cuts of up to 15 percent, according to the General Workers’ Union. Some sanitary services have been privatized, and 262 hospital beds were cut. The regional government fell behind on payments of 110 million euros to social services for 30,000 people who cannot get by on their own because of old age or infirmity. Some Valencia associations catering to the needy have lost 95 percent of their public funding.

“It’s not a question of money,” said Marco Fornes, who looks after the disabled at a public institution and went for three months without pay last year. “It’s a question of priorities.”

Most countries spend some public money on soccer. Public funds have been used to build stadiums from England to Italy to the United States, and state investment funds in the Persian Gulf have taken major stakes in European clubs. Places like Monaco give tax breaks to clubs.

But outside of Spain it’s hard to find a league that gets so many sweetheart deals.

The EU probe is examining tax breaks granted to the Real Madrid, Barcelona, Athletic Bilbao and Osasuna soccer clubs. Brussels is also questioning the multimillion-euro loan guarantees that the Valencia regional government provided for local clubs Valencia, Elche and second-division Hercules. The third part of the EU probe concerns a property swap in which Real Madrid was given land around its stadium in one of Spain’s most expensive neighborhoods.

The direct public cash injections that the AP found represent a different possible violation of EU competition law. Documents show that subsidies, photo and video rights and contracts with public companies have brought regular income for La Liga clubs, partly shielding them from the economic crisis. Apart from Real Madrid and Barcelona, titans that appear healthy enough to survive on their own, the public money has provided a lifeline for the top-flight clubs. The AP tally was based on club accounts, the budgets of local and regional authorities, and documents submitted to regional audit courts that oversee public expenditure.

The spending goes to teams large and small. Barcelona got 15 million euros from 2008-12 for wearing the logo of TV3, the publicly owned regional broadcaster. Espanyol de Barcelona, the city’s second-biggest club, got 10 million euros for the same thing. Madrid’s local government came up with 7 million euros to help build a new training complex for Rayo Vallecano. Getafe, a poorly supported club south of the capital, has managed to stay afloat and in the first division in part thanks to taxpayers’ money — though it plays to largely empty stands.

Soccer teams have not been completely immune to Spain’s economic meltdown. Spain’s national budget in 2012 was 312 billion euros, down from 314 billion euros in 2008. During that time, more spending has been steered toward paying off the national debt and for welfare payments amid a jobless rate of around 25 percent. As education spending was cut 25 percent from 2008-12, subsidies for soccer also fell by a quarter.

Since 2004, close to 30 Spanish clubs have filed for bankruptcy protection. All of Valencia’s teams — except for Villarreal — came close to collapse. To keep themselves afloat, the Valencia teams borrowed a total of 119 million euros. The banks demanded a guarantor for the loans, and the regional government filled that role.

When the clubs couldn’t meet payments on the loans, authorities stepped in to prevent the bank from foreclosing by using taxpayer money — 28 million euros of it so far.

“The Valencia case is a covert rescue operation,” Francesc Pujol, a professor of sports and business at the University of Navarra, said after reviewing the AP’s findings.

The issue of taxpayer money handed to Spanish clubs is “legally murky,” and any judicial assessment would need to be made on a case-by-case basis, according to Juan Carlos Hernandez, a professor of administrative law at the University of Navarra.

Spanish law allows regional governments to provide financial support for sports through subsidies and sponsorship. But it also insists the money spent must show a justifiable return and not distort the free market.

“You can’t say a priori that a sponsorship deal is illicit,” said Casto Gonzalez-Paramo, an expert in competition law with the Madrid office of Hogan Lovells International LLP. “You would have to assess market conditions, examine what each party gets out of the agreement, and whether the return from the advertising and the media impact justify the expenditure.”

He said the European Commission commonly takes 18 months to reach a decision in competition probes like the one currently targeting Spanish football clubs. If found to be in violation of EU rules, they could be forced to give the money back, potentially bankrupting them.

Club officials defend the spending. “Generally speaking, the amount paid by public bodies is a little above the market price,” said Ignacio Garcia Gil, Levante’s finance director. “But the Spanish league has a global reach and is seen around the world.”

“We have carried out studies into the impact of advertising on jerseys and the return is much higher than the investment,” Garcia Gil said. He provided no data to back up that claim.

The government has indicated that it plans to stand by its soccer clubs, whose international success has brought pride and joy to millions of Spaniards amid the financial crisis.

“Obviously the government will fight till the end on the clubs’ behalf,” Foreign Minister Jose Manuel Garcia-Margallo said in Brussels as the EU prepared to launch its investigation. “They too are part of the Spanish brand.”