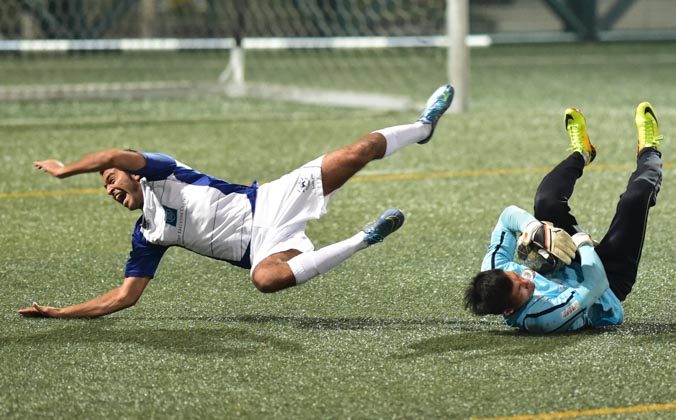 Saturday’s (Dec12) first game between Glory Sky Wong Tai Sin and Kitchee ended in a nil-all draw, with Kitchee left to rue their inability to make up ground on the league leaders. Saturday’s other game between BC Rangers and Kwoon Chung Southern also ended nil-all, but had fewer goal-scoring opportunities than the earlier game.

In Sunday’s first game, South China ended up defeating Dreams Metro Gallery 4-nil with all of the goals coming in the second half. South China opened the scoring in the 58th minute when Luiz Viera scored after Liang Zicheng had headed the ball back to him from Chung Kin-fung’s corner. Viera making up for having had his penalty kick four minutes earlier saved by Dreams Metro Gallery goalkeeper Pang Tsz-kin. South China doubled their lead in the 71st minute when Awal Mahama scored from Chan Siu-ki’s pass. Manoel Santos added a third in the 85th minute from Chan Siu-ki’s pass, and Awal Mahama scored the fourth in the time added on.

In Sunday’s other game, Eastern were 6-1 victors over Yuen Long, with Diego Moreira heading in Xu Deshuai’s free kick from the right hand side of the pitch for the early lead. Eastern doubled their lead in the 31st minute when Giovane Da Silva broke through and reached the edge of the penalty box before firing home to take a 2-nil lead to the half-time break.

Tai Po lead the table with 31 points from 13 games, with Citizen second with 28 points, HKFC third with 27 points, Sun Hei fourth with 26 points, and Yau Tsim Mong fifth with 25 points, though Yau Tsim Mong have a game in hand.