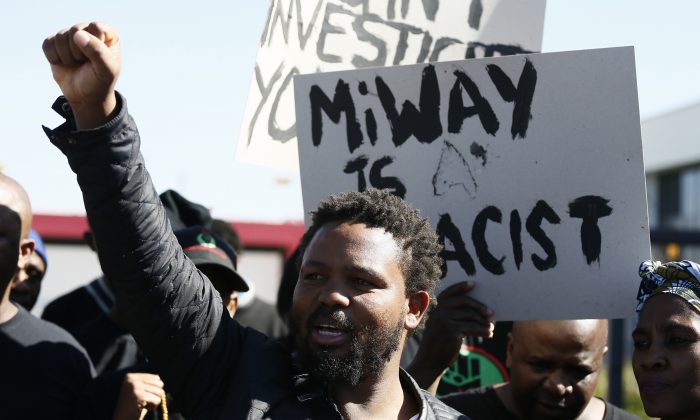 A South African politician is facing criticism after he threatened to kill five white people for each black person killed.

Andile Mngxitama, the leader of the far-left Black First Land First (BLF)—a Marxist, revolutionary socialist party in the country—made the controversial statement during a rally on Dec. 8.

When I watched documentaries on groups like Suidlanders preparing for a race-based civil war in South Africa, I used to laugh. Here is BLFs Andile Mngxitama explaining to his supporters what's going to happen to white people. I am actually lost for words to describe this content. pic.twitter.com/P4ceJjxTSR

In a video circulating on social media, he asks a crowd of people: “For every one of them, we’ll kill how many?” The crowd responds with, “Five.” This goes on for a few moments before Mngxitama calls for the killing of dogs and cats owned by white people.

Several days later, Mngxitama claimed his words were taken out of context.

“This is a blatant distortion of my remarks,” said Mngxitama, reported News24. He said the BLF is a “peaceful movement.”

But he later warned those who allegedly incite violence against black people in South Africa, saying his party will strike back.

Mngxitama said his Dec. 8 comments were directed at billionaire Johann Rupert over comments he made about the South African taxi industry. Rupert alluded to the EFF in a recent interview and said that if “those red guys come” they should remember he has his “own army,” News24 reported. Rupert apparently wasn’t referring to Mngxitama’s group but was referring to the EFF.

Mngxitama, meanwhile, claimed Rupert’s statements terrified him: “Johann Rupert sits there with absolute arrogance claiming he has a private militia that he can unleash,” the Daily Mail reported.

The Mail notes that Mngxitama and the BLF are Marxist revolutionaries who oppose capitalism. He’s been accused of racism numerous times in the past. The BLF’s logo features a black power-style fist with a red star.

This week, the South African Human Rights Commission (SAHRC) said there have been numerous complaints lodged against the BLF leader. “The SAHRC calls on all within South Africa to assist in fostering a constitutional democracy, based in equality, dignity and freedom by refraining from utterances and actions which threaten social cohesion,” said Gail Smith, a spokeswoman, the Times-Live reported.

“It must be made clear up front that Mngxitama’s recent remarks are a violation of human rights and tantamount to hate speech. On Human Rights Day, and every other day … hate speech must always be spoken out against. Mngxitama’s comments cheapen people’s rights to human dignity which is a fundamental tenet of what liberal democracy depends on,” Maimane said.

Officials filed criminal charges against Mngxitama on Dec. 11, for inciting hatred and inciting violence due to his comments, reported the African Daily Voice. National chairman of Pakes Dikgetsi said his statements were akin to those made by Adolf Hitler and former Ugandan dictator Idi Amin.