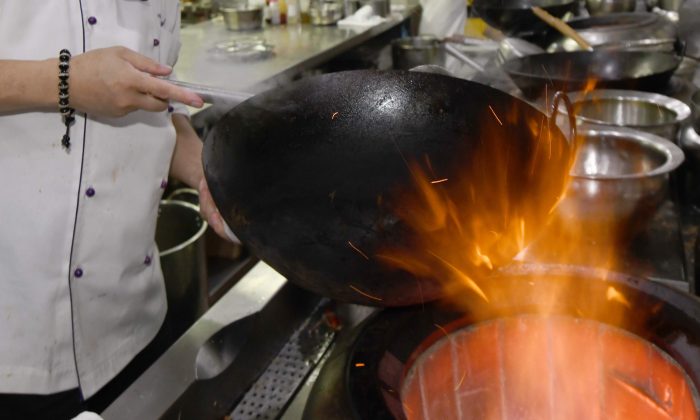 For the advanced chef, cooking with the freshest ingredients can be a task not left to the faint of heart! An amateur Chinese chef, however, took a chance with a dish that proved for a surprising outcome. In a video posted to Weibo, China’s version of Twitter, on March 20, a man in an undisclosed location in China attempted to cook a large bowl full of Asian Rice Eel.

The Rice Eel gets its name for being found and caught in rice paddies. It makes for a common dish in parts of China, which could be literally translated as “Explosion-Fried Rice Eel.”

The chef in the video had a slightly different spin on the name of the dish.

How Not to Cook Eel

In the video, the chef shows his meal-to-be. The aluminum basin is filled to the brim with eels of different lengths and sizes. He even pushes a large one back into the bowl as it attempts to slither out.

In the next shot, a wok is shown at full boil over a gas stove. The chef begins to dump the bowl of live eels into the boiling water.

As the eels hit the scalding water, they flail wildly in all directions. The sound of water hissing and sizzling as it hits the open flame fills the kitchen.

In seconds, his entire kitchen is also filled with desperate wriggling water-life.

Most of the eels escape onto the floor and counter top, while only a few remain inside the wok, now motionless.

Until this moment, the man has not said a word. Only after he surveys his cooking catastrophe does he exclaim in a local dialect: “What a mess!”

One user commented that he should put the eels in water first, then boil.

How the Pros Cook

In China, people joke that they eat anything and everything. There is also a rich variety of ways to cook specific ingredients.

The Rice Eel in the video can be cooked into many different ways. A very common way, the so-called explosive style, is more correctly translated as “Flash-Fried Rice Eel.”

Many of these dishes only mention the main ingredient, but also come along with various vegetables, spices, and sauces to add flavor.

In fact, many of these dishes can readily substitute the eel for other meats, though the way they are cooked may not be the same.

In some regions, Teriyaki Beef may always come with meat cut into smaller pieces and mixed with potatoes. But Teriyaki Pork would be only a bowl of teriyaki flavored pig hoof.