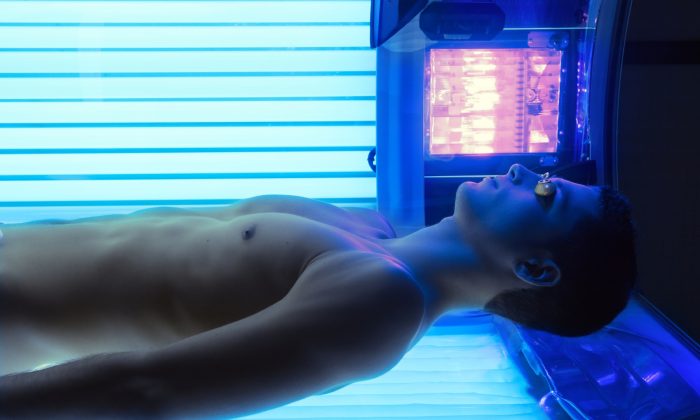 Slash Your Risk of Cancer – by Breaking This Cardinal Rule

UV light from the sun and tanning beds is the main vitamin D source for humans, and researchers have identified an astonishing number of health benefits of vitamin D in the past decade.

But since UV exposure has been suspected of causing skin cancer, many conventional health authorities still warn against it.

A recent review of studies sought to review the health effects of solar radiation, tanning beds and vitamin D.

The researchers looked at data from different time periods for populations at different latitudes, with the aim at looking at the relative risk for cutaneous malignant melanoma associated with tanning bed use, vitamin D and UV effects.

They found that increased tanning bed use was NOT associated with melanoma.

According to the authors:

“Due to the fear of skin cancer, health authorities warn against sun and sunbed exposure.

This policy, as well as the recommended vitamin D doses, may need revision.”

In fact, Ivan Oransky, the editor of Reuters Health, has previously noted that the real risk of getting skin cancer from a tanning bed is less than three-tenths of one percent—and even then, this is likely only from those who habitually overexpose themselves.

The authors of the featured review state that while sun exposure is commonly assumed to be the main cause of cutaneous malignant melanoma (CMM hereafter referred to simply as melanoma, the most lethal form of skin cancer—the matter is actually NOT “settled.”

The theory is still under dispute, and in their analysis, they reviewed the arguments for and against causation.

With a hint of irony, the authors state that “several factors are probably involved, as exemplified by a relationship sometimes found between gross domestic product and melanoma incidence.” They also list a number of associations between sun exposure and melanoma found in the medical literature, such as:

Patients with the highest blood levels of vitamin D have better survival prognosis than those with the lowest vitamin D levels.

So what about tanning beds—are they more dangerous than regular sun exposure? As you may recall, the Senate’s health-care overhaul bill now includes a 10 percent tax on tanning services to dissuade you from engaging in such “health-harming” activities; a move that is unquestionably short sighted and counterproductive considering the fact that vitamin D deficiency is rampant in the U.S.

Where tanning beds are concerned, the science is more conflicted, with some studies finding no detrimental impact from tanning beds on skin cancer rates while others have found that rates of skin cancer are higher in those using tanning beds than those who do not tan. The reason for these conflicting findings, the authors speculate, could very well be due to differences in UVA/UVB ratios and intensities between different types of tanning beds.

IF Sun Exposure Increases Your Risk of Cancer, Just How Great is that Risk?

Even when looking at the research showing an increased risk for skin cancer from sun exposure, just how great is that risk? Ivan Oransky, M.D., editor of Reuters Health wrote an excellent commentary on this last year.

Each year, during the month of May, as the sun slowly begins to thaw away those winter blues, you start getting bombarded with Skin Cancer Awareness ads; all of which pitch the idea that the sun is your enemy. Many will include the statistic issued by the World Health Organization, which states that “use of sunbeds before the age of 35 is associated with a 75 percent increase in the risk of melanoma.”

Sounds horrific, but how real is this threat?

“[W]hat does that really mean? Is it 75 percent greater than an already-high risk, or a tiny one?” Oransky writes.

“If you read the FDA’s “Indoor Tanning: The Risks of Ultraviolet Rays,” or a number of other documents from the WHO and skin cancer foundations, you won’t find your actual risk. That led AHCJ member Hiran Ratnayake to look into the issue in March for The (Wilmington, Del.) News Journal, after Delaware passed laws limiting teens’ access to tanning salons. The 75 percent figure is based on a review of a number of studies, Ratnayake learned. The strongest such study was one that followed more than 100,000 women over eight years.

So, while statistically true, it’s really misleading, and incites undue fear. By only presenting the relative risk increase (the 75 percent increase) they make the risk sound rather unreasonable. Meanwhile, your absolute risk of developing skin cancer from sun exposure is still, AT WORST, below one percent! And please remember, these highly distorted scare tactics fail to mention the BENEFITS of the exposure, which radically reduce the dangers of the far more common, breast, prostate and colon cancers that are reduced.

Understanding the Difference between Relative Risk and Absolute Risk

Oransky explains the importance of understanding the difference between relative risk and absolute risk in his article:

You can see how if someone is lobbying to ban something – or, in the case of a new drug, trying to show a dramatic effect – they would probably want to use the relative risk. … So when you read a study that says something doubles the risk of some terrible disease, ask: Doubles from what to what?”

Tanning Beds Decrease Ten Times More Cancers than they Cause

Another important factor to keep in mind is that vitamin D, ideally from sun exposure, may decrease your risk of many other cancers and chronic diseases.

According to the featured review:

“… it can be estimated that increased sun exposure to the Norwegian population might at worst result in 200-300 more melanoma deaths per year, but it would elevate the vitamin D status by about 25 nmol/l and might result in 4,000 fewer internal cancers and about 3,000 fewer cancer deaths overall.

The lack of sunlight exposure leads to more health problems than bone disease and increased risk of cancer. Other benefits include protection against infectious diseases and non-cancerous diseases (diabetes, CVD, multiple sclerosis, and mental disorders).”

Overall, I believe the less than one percent risk of developing skin cancer from sun exposure or a tanning bed is well worth it, as increased vitamin D levels will protect you against so many other debilitating and lethal diseases and cancers… There’s also compelling research showing that sun exposure will indeed protect you against melanoma—the most dangerous form of skin cancer.

In my view, a tanning bed comes in as a close second after natural sun exposure as the ideal way to optimize your vitamin D levels (as opposed to getting it from fortified food items or supplements). In a recent interview, Dr. Stephanie Seneff explained how vitamin D—specifically from sun exposure—is intricately tied to healthy cholesterol and sulfur levels, making the recommendation to get your vitamin D from the sun all the more important.

As a quick summary, when you expose your skin to sunshine or a tanning bed, your skin synthesizes vitamin D3 sulfate. This form of vitamin D is water soluble, unlike oral vitamin D3 supplements, which is unsulfated. The water soluble form can travel freely in your blood stream, whereas the unsulfated form needs LDL (the so-called “bad” cholesterol) as a vehicle of transport. Her suspicion is that the oral non-sulfated form of vitamin D may not provide all of the same benefits as the vitamin D created in your skin from sun exposure, because it cannot be converted to vitamin D sulfate.

I believe this is a very compelling reason to really make a concerted effort to get ALL your vitamin D requirements from exposure to sunshine, or by using a tanning bed. If neither of these are feasible options, then you should take an oral vitamin D3 supplement.

Carole agrees that sun exposure is ideal as it may also provide other health benefits. Lack of sun exposure now appears to be at the very root of many common health problems, which strict sun-avoidance has progressively made worse. Vitamin D deficiency is, after all, a fairly recent health concern, historically speaking.

“I think it is obvious that the reason we have this deficiency is because we have become an industrialized nation,” she says. “… What we’ve done is we’ve come inside. We cover up. Even in San Diego where I live, when they measured my level it was 18 ng/ml.

When we did a scientific test of what it’s going to take to get enough sun in San Diego… at my age – age is a factor in how much you absorb – we came to a test conclusion that it was going take 15 to 20 minutes a day in the prime time of UV, between 10 am and 2 pm, each and every day… with 40 percent of my body exposed. … I encourage people to take advantage of the sun. The only message I have about the sun is: don’t burn. That’s it.”

The Role of Vitamin D in Disease Prevention

A growing body of evidence shows that vitamin D plays a crucial role in disease prevention and maintaining optimal health. There are about 30,000 genes in your body, and vitamin D affects nearly 3,000 of them, as well as vitamin D receptors located throughout your body.

According to one large-scale study, optimal Vitamin D levels can slash your risk of cancer by as much as 60 percent. Keeping your levels optimized can help prevent at least 16 different types of cancer, including pancreatic, lung, ovarian, prostate, and skin cancers.