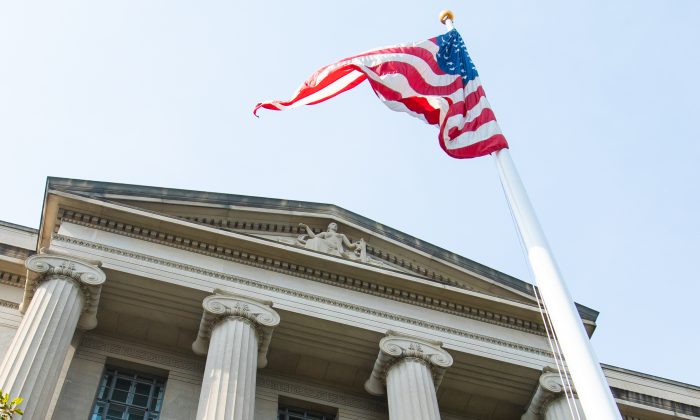 The Department of Justice in Washington on June 17, 2018. (Samira Bouaou/The Epoch Times)
US News

A 46-year-old man was sentenced to 10 years in prison after police discovered on his computer dozens of pornographic images involving children.

According to the Department of Justice (DOJ), the material “included images and videos from 81 known child pornography series.”

The material possessed by Douglas Goldsberry of Elkhorn, Nebraska, also included “depictions of infants and depictions involving bondage of children.”

Police had discovered the material on Goldsberry’s digital devices after investigating allegations of pandering.

He has been arrested in May 2017 after “he was suspected of ordering escorts to his neighbors’ home without their knowledge.”

Goldsberry will serve his federal sentence for possessing child pornography concurrent with a state prison sentence for the pandering.

The DOJ under the Trump administration has made combatting child sex abuse a key focus. On June 12, Attorney General Jeff Sessions announced that his department had arrested 2,300 people across the country on charges related to child sex trafficking, child sex abuse, and the production of child pornography.

Among those arrested were Americans who abused children overseas, including in Thailand and the Philippines.

FBI Director Christopher Wray revealed on June 14 that his agency so far this year rescued more than 1,000 children from child sex predators.

According to the International Labor Organization, nearly 5 million people around the world are currently being sexually exploited. Nearly 1 million of those are children.

“No child should ever have to endure sexual abuse,” Sessions said in a statement on June 12. “And yet, in recent years, certain forms of modern technology have facilitated the spread of child pornography and created greater incentives for its production.”