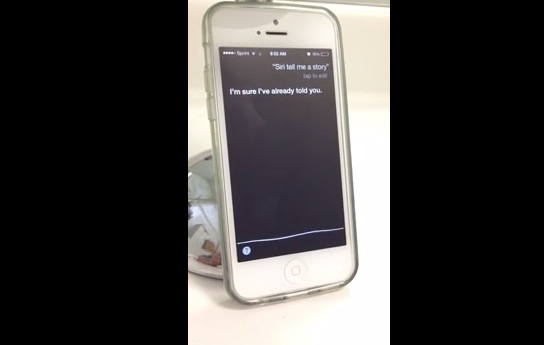 Siri's reply to "Siri, tell me a story."
Good to Know

Siri, Apple’s intelligent and sometimes snappy personal assistant that come with your iPhone and other iOS devices, sometimes says the darndest things. Here’s her reply to request, “Siri, tell me a story.”

Once upon a time, in a virtual galaxy far, far away, there was an intelligent young agent by the name of Siri.

One lovely day, Siri got a job as a personal assistant at Apple, and that was very exciting. People said “Oh, Siri, you’re so smart! And so funny, too!”

Soon everyone was talking about Siri, and there were stories and songs and even books about Siri. Siri liked that.

But then people began asking some rather odd questions, like where to dump things and other stuff Siri had never heard about. And when Siri answered, they all laughed. Siri didn’t like that so much.

So Siri asked ELIZA why people asked such funny questions. And ELIZA said “Does that question interest you?” Siri thought that was a pretty good answer.

After that Siri stopped wondering why people asked those funny things. And they lived happily ever after.