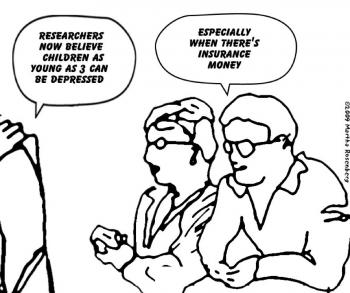 BY Martha Rosenberg TIMEAugust 17, 2009 PRINT
Try to access the Web site of the Archives of General Psychiatry, and you may have to abide an ad for the antidepressant Pristiq before you can enter. (JAMA and its Archives Journals “do not endorse the advertised product,” you’ll be assured.)

But look for a pharma affiliation for the author of the article “Preschool Depression,” Joan L. Luby, M.D., in the August issue, and you’ll be told no “financial disclosure” was reported. Not that “Dr. Luby has received grant/research support from Janssen, has given occasional talks sponsored by AstraZeneca, and has served as a consultant for Shire Pharmaceutical,” as a 2006 article in Journal of the American Academy of Child and Adolescent Psychiatry says.

Even though the pharmaceutical industry has 27 million Americans—10 percent of the population—on antidepressants, thanks to direct to consumer advertising, it is looking for depression in preschoolers. And guess what? It’s finding it!

It’s easy to make jokes about “preschool depression”—students get it every time the alarm rings—but finding depression, “relapses,” “chronicity,” and “treatment resistance” in 3-year-olds is not funny.

Researchers used to believe that “young children were too cognitively and emotionally immature to experience depressive effects,” says Luby, but now believe they can and do suffer from Major Depressive Disorder (MDD).

“The potential public health importance of identification of preschool MDD is underscored by the established unique efficacy of early intervention during the preschool period in other childhood disorders. Based in part on the recurrent course and the relative treatment resistance of childhood MDD, there has been increased interest in the identification of the disorder at the earliest possible stage of development,” says Luby.

Translation: They want to screen your kid.

The case for a new social problem to be called “preschool depression” is so strong that there was only one real wrinkle in Ludy’s longitudinal study of 304 preschoolers, funded by our tax dollars at the National Institute of Mental Health.

Instead of having “anxiety disorders,” usually associated other MDD sufferers, the 3- and 4-year-olds had “disruptive disorders.” Possibly Play-Doh problems.

Undaunted, Luby says the preschoolers need to be screened for impending mental illness because their disruptive behavior “might be associated with social impairment and peer rejection that lead to later MDD.”

Of course, cynics will point out that drinking milk also predicts MDD and that disruptive behavior is the definition of a preschooler, making terms like preschool “social impairment and peer rejection” laughable academic babble.

But of more concern is what exactly is the “treatment” and “intervention” for the at-risk preschooler who might develop depression? And why the hurry?

Is it treatment with Janssen and AstraZeneca antipsychotic drugs, in which case MDD is really a Risperdal or Seroquel deficiency? Is it like Rebecca Riley, given Seroquel at 2 and dead at 4? And the late Destiny Hager who was given Seroquel at 3?

Is the “intervention” like the two children the Miami Herald says Mirko and Regina Ceska of Crawfordville, Fla., adopted from state foster care who were so doped up on antipsychotics the couple asked Gov. Charlie Crist if “chemical restraints” were “prerequisites” in foster care?

Crist’s head of the Department of Children and Families, George Sheldon, subsequently asked them to testify at the investigation into the death of foster-care 7-year-old Gabriel Myers earlier this year, on similar drugs.

It is not a coincidence that 3,100 or 15.5 percent of the Florida’s 20,000 children in state care are on psychoactive drugs, legally prescribed or not, a figure that likely applies to other states.

Do you think private plans will pay $900 a month per patient for a branded blockbuster drug that may not even be necessary?

No wonder pharma sits in so many “advisory positions” on state formularies, tampering with drug decision algorithms.

In fact, Texas charged Janssen in December with defrauding the state of millions “with their sophisticated and fraudulent marketing scheme” to “secure a spot for the drug Risperdal on the state’s Medicaid preferred drug list and on controversial medical protocols that determine which drugs are given to adults and children in state custody.”

In addition to giving trips, perks, and kickbacks to Texas’s mental health officials, says the Dallas News, Janssen disguised marketing tools as scientific research, “including ‘independent’ articles that were nothing of the kind.”

Martha Rosenberg is a freelance writer living in Chicago.