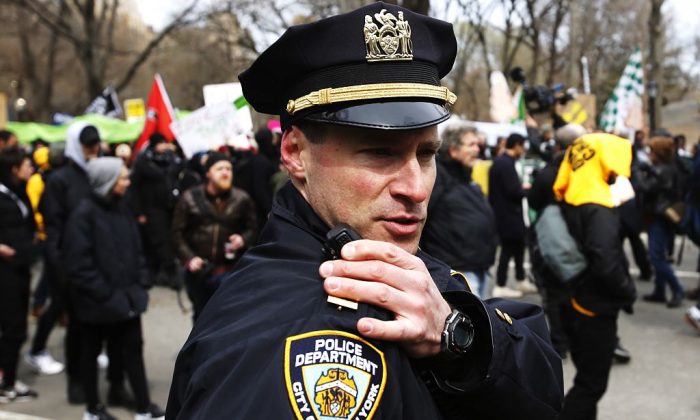 NEW YORK, NY - MARCH 19: An NYPD officer talks on his radio while people take part in a protest against Republican presidential candidate Donald Trump, on March 19, 2016 in New York City. People protest against Trump's policies which threaten the Immigration system and many of the Latino, Black, LGBT, Muslim, and other communities. (Photo by Eduardo Munoz Alvarez/Getty Images)
New York

Bratton said Wednesday that investigators reviewed video and determined that someone else was the intended target.

The department has taken extra precautions since the recent killings of police officers in Dallas and other places.

On Wednesday, the Sergeants Benevolent Association issued a statement, saying: “Although the media is reporting the police were not the intended targets, we have strong information and reason to believe that they were. We are confirming all information posted here and truly hope that our posting is inaccurate.”

The incident took place in the 70th precinct at the corner of Ditmas avenue and East 23rd St. The Sergeants Benevolent Association said a dark-colored sedan with tinted windows approached NYPD officers in uniform, and there was a “statement about getting them” and the people inside the car “proceeded to fire shots at the officers,” according to the association. The car was occupied by four black males, who fled the scene, and vehicle was subsequently dumped elsewhere, the association said.