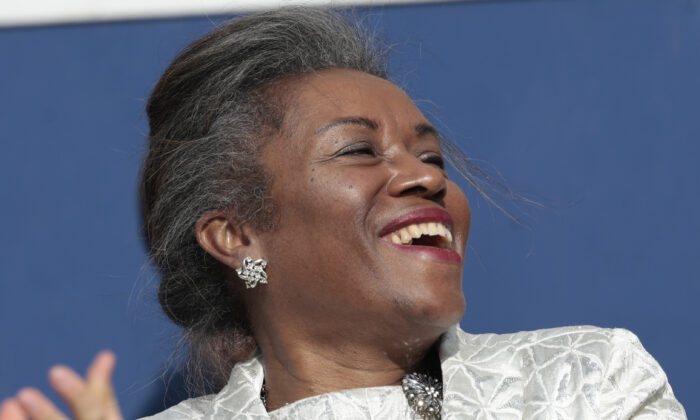 Lieutenant Governor of Virginia Winsome Sears smiles during the 74th Inauguration Ceremonies on the steps of the Virginia State Capitol in Richmond, Va., on Jan. 15, 2022. (Anna Moneymaker/Getty Images)
Viewpoints

The lieutenant governor of Virginia, Winsome Sears, is all of these, but she is also tough and has convictions on issues that matter to her and thinks should matter to Virginians and the nation.

As President Biden last Saturday commemorated “Slave Remembrance Day,” Sears told me during an interview in her office, “If you want to live in the past, go ahead, just don’t drag me back with you.” On election night last November, she brought cheers from her supporters when she noted how much has changed since the start of the civil rights movement: “We (meaning people of color) own the water fountains. We’ve had a black president elected twice …”

The former Marine and Jamaican immigrant (she says her father arrived in America with $1.75 in his pocket) is now the second most powerful office holder in the state and the first female lieutenant governor. Sears can charm when necessary, but her boldness in discussing controversial issues reveals a backbone other Republicans should emulate.

I ask Sears why the media seem to ignore or mischaracterize black conservatives like her and why so many blacks continue to vote for Democrats. “In order for (Democrats) to continue to win,” she says, “they need to get 80 to 90 percent of the black vote. That’s why they are so full of hatred when conservatives like me, or libertarians, don’t think the way they do. … We don’t really care. The slaves did not die in the fields to be beholden to the Democrat Party. They wanted their freedom … their families to be reunited … and their children to get a good education.”

Sears says she is mystified by how “the Democrat Party became synonymous with black people. (Democrats) were the ones who were keeping us from achieving. Then there’s this other thing that is happening with black women not having their babies. And they call me a white supremacist for saying we want more black babies. Democrats have to make up their minds.”

Sears says she believes Donald Trump won more of the non-white vote in 2020 than he did in 2016 because he delivered on jobs for minorities and “black entrepreneurship increased to about 400 percent of where it had been.” She also notes Trump’s dedication of a funding stream to Historical Black Colleges and Universities (HBCU). “He forgave $360 million in debt they owed since (hurricane) Katrina days.” According to AP VoteCast, Trump won 8 percent of the black vote in 2020, about a 2 percentage-point gain on his 2016 numbers.

Would she endorse Trump if he runs in 2024? She hedges: “I’m going to hold my fire. I want to see what he says, what he does, and who else is out there.”

I ask her about what some have referred to as “Christian nationalism.” Sears, who is upfront about her Christian faith, responds: “I think what we have to be careful about as Christians is that no one is on the throne except Christ. … We know that God can use anyone. He even used a donkey to speak to Balaam (an Old Testament story) to tell him he was going down the wrong path. So, if He can use a jackass, He can use anybody.”

How would she measure success? “What the world considers success, I don’t. I have come to believe it the way the Lord defines it. Were you obedient?” She recalls the biblical stories that seemed to define failure at the time when “they killed the prophets. … All He wants to know is did you obey me?”

Yet, she is amazed at her own accomplishments. “Winsome wasn’t born here,” she said. “This is not her country, not her culture, and yet here she is—second in command in the former capital of the confederacy. The KKK must be turning over in their graves.”

Only in Virginia… and America.