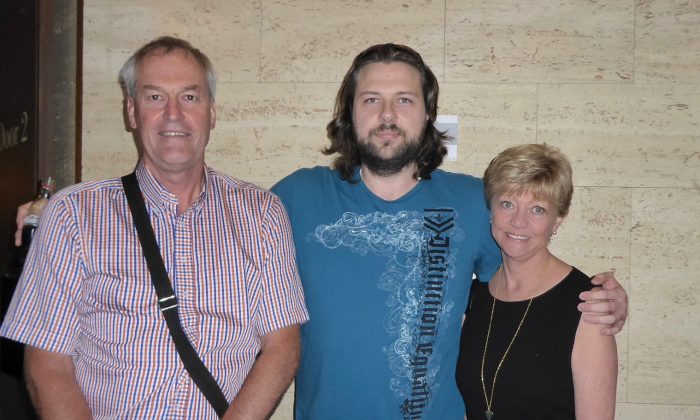 ADELAIDE, Australia—Shen Yun Performing Arts was beyond words for Sally McLean when it opened at the Adelaide Festival Centre for a matinee performance on Feb. 7.

Ms. McLean, now retired was a webmaster and writer in information technology and also an artist, designer and photographer of gemstone jewellery. She attended Shen Yun with her husband, Barry Hewlett, a manager in the mining industry and son Paul Mclean, an arts student. This is the first time they saw Shen Yun but it will certainly not be their last.

Ms. Mclean was “very impressed” with Shen Yun. When the first curtain went up she said it took her breath away. “Spectacular! Colour!” she said and the costumes were to die for.

There were so many aspects to the performance Ms. McLean loved. “I loved the movement, I loved the percussion, the fans and the boys with the drums—the talent,” she said. But to put it in the words of a writer she said, “that would be very, very difficult to capture. I think you have to see it.”

The website states, “With state-of-the-art graphics technology, Shen Yun’s digital-backdrop team creates vividly animated settings, extending the stage and transporting the audience to a world where heaven and earth are one.”

As an information technology writer Ms. McLean loved the digital backdrop. “The backdrop with the CGI with the computer generated images is brilliant. Love it,” she said.

The story dances give the audience an insight into traditional Chinese culture that is built upon universal values such as benevolence, justice, faith, and respect for the divine. One dance depicting the present day persecution of Falun Dafa, a peaceful meditation practice, in China particularly touched Ms. McLean’s heart.

“It is actually very emotional … I was actually welling up with tears. It touches your heart strings.” She said you could really feel their plight and she admired their courage not to give up their beliefs. She felt the persecution reported in the media is only the tip of the iceberg compared to what is really happening in China today. She said more people need to know and care.

Mr. Hewlett was also touched by the same dance and was in awe of what he was experiencing.

“My senses are alert and just in awe of the coordination of the performers and the differences in the costumes and the extra long arms and the fans and the drums,” he said.

The vision of the dancers and the costumes on the vivid backdrops took him on a journey where he could imagine being there in person.

‘I will always remember Shen Yun’

Paul McLean was amazed by everything he experienced at the Shen Yun performance. When he first saw a poster for Shen Yun he said he just had to see it. He wanted to see something different and experience a different culture. It was all he hoped for and more.

“I’m just really, really honoured … seeing something very different and perfect, absolutely perfect,” he said. “It was exceptional from start to finish, captivating.”

“The agility, the perfection of everyone is just amazing,” he said.

He was amazed to hear about classical Chinese dance being passed down for thousands of years creating such a rich and diverse culture. He found it spell binding “that it can culminate in a performance like this, is just amazing.”

Mr. Mclean said he would walk away from Shen Yun and would be thinking about it for a long time and that he would always remember it.

Reporting by Steven Xu, Luo Ya and Leigh Smith