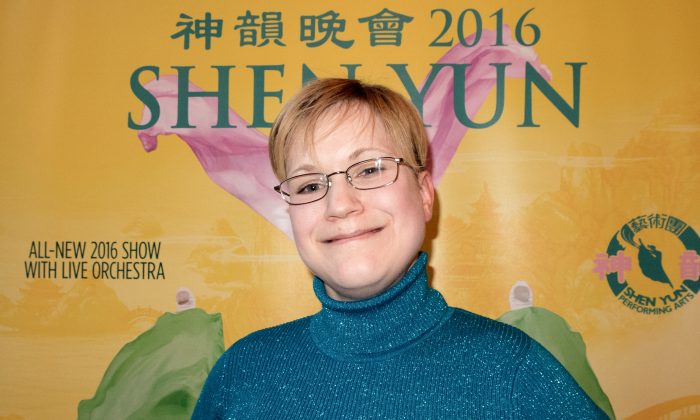 SALT LAKE CITY—From the moment the stage lit up, Holly Scholz could tell she wasn’t just in for music and dance. By the time the curtain fell on Shen Yun Performing Arts at Janet Quinney Lawson Capitol Theatre on Dec. 30, Ms. Scholz, a student, said she had witnessed an overarching story about the divine that gave her hope and strength.

“It kind of gave me more of a push to be better,” Ms. Scholz said.

Seeing the New York-based performing arts company had been Ms. Scholz’s wish for years and years, and the outing had been a birthday present. It was a “breathtaking and just absolutely magnificent” expression of “originality and creativity through the divine,” she said.

The performance included dances with stories from 5,000 years of Chinese civilization. Ms. Scholz shared her interpretation: not only did each dance tell its own story, but together there was an overarching story line filled with symbolism about the imparting of knowledge, of culture, from heaven.

“Here, you have something with meaning,” she said. Shen Yun gave her much to reflect on in terms of connections—to nature, to others, and to the divine, she said. The stories also brought up the idea of ascension, and doing so through cultivating oneself, she said.

“We’re all together in an overall big picture, and we all need to be connected and also find our own meaning so we can all ascend together,” Ms. Scholz said.

The stories took the audience on a journey to the highest mountains, a place where the sea and the sky meet, and to the moon. In the finale, there is a scene set in contemporary China, where everything added up to a hopeful conclusion for Ms. Scholz.

“At the very end you have a newer hope, … where it kind of wrapped together, and everyone gives that breath of hope,” Ms. Scholz said. “I could see the expression of the characters and see how they were more powerful, more strong in spirit. I really liked that at the end.”

Mr. Cope, owner of training company Acumen Learning, has worked with 18 of the Fortune 50 companies, including AT&T, Coca-Cola, and Disney. He attributes his success in leading others to success to the use of systematic models, and being able to get to the essence of a big idea like business.

Similarly, he connected most to the broadminded and organized aspects of the performance. He enjoyed the energy of the performance, the “precisely right” choreography of a quick-stepping Mongolian folk dance where the dancers were perfect down to the smallest movements and in sync with not only the orchestra but the thin, paddle drums they used throughout the dance.

In Shen Yun’s revival of traditional culture, which is banned in China, Mr. Cope saw “the message that freedom is more important, and allowing people to believe and exercise their religious rights, their beliefs the way that they like to.”

“It’s just interesting that this is seen in an art form like this,” Mr. Cope said. “I think it helps people understand the message.”