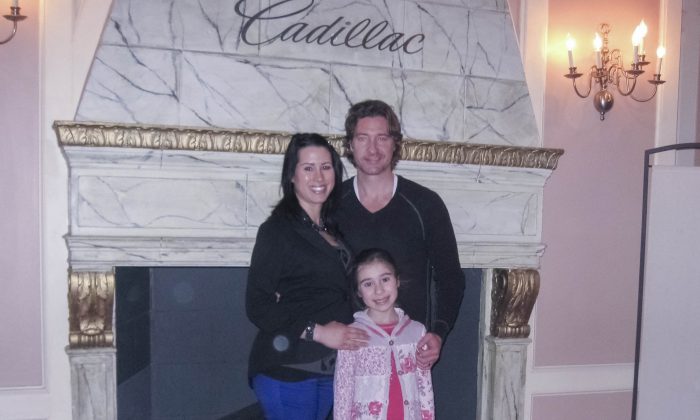 CHICAGO—There are many ways of telling a story, such as through film or poetry. And Shen Yun Performing Arts tells many stories from the Chinese heritage through the use of traditional Chinese dance.

Shen Yun’s mission is to revitalize 5,000 years of a glorious Chinese civilization and its associated values and wisdom. It does so through classical Chinese dance, a unique orchestral sound combining Eastern and Western traditional instruments, and an animated digital backdrop for each of the different myths, legends, and heroic stories from history presented.

“I really thought telling the stories through the dance was very interesting,” said Michael Gotch, a Sales Rep for MTT Corporation, a Japanese telecommunications company. Mr. Gotch attended the March 7 performance at the Cadillac Palace Theatre, with his wife, Kat, and 7-year-old daughter, Claudia.

Mrs. Gotch, an anesthetist, found the storytelling enhanced by the emcees who provided brief introductions in both English and Chinese for each of the 20 mini-dance, music, or sung performances. “That is a beautiful introduction with the [emcees] that explains what is going to happen and then [there are] the colorful scenes, the dancing, the history, it all came together very beautifully,” she said.

A few of the selections, like The Power of Compassion, feature stories that take place in modern China. A place where, like Mr. Gotch said, “a person is not necessarily free to showcase traditional culture.”

“I think it has a lot to do with communist China and [how] all the beautiful things they showed on the stage [are] no longer allowed right there where they began,” continued Mr. Gotch.

‘There is a lot of magic in Chinese history’

“It starts out with a cute storyline about magic,” said Jim Scharnell, president and CEO of Quality Catering, who serve school lunches to over 16,000 Chicago students per day. “There is a lot of magic in Chinese history.” He attended the performance with Jeryl Matusik, a retired special needs medical assistant.

The selection Monkey King and The Skeleton Demon is a story about a magical monk who journeys to the West with an interesting group of characters, states the program book. Along the way the skeleton demon causes seemingly endless harm to the group. The story features magic and supernormal abilities that were very common in both Western and Eastern stories throughout history.

“It is a beautiful storyline,” continued Mr. Scharnell. “I love the storyline.”

The story of the Monk, the Monkey King, and the other companions is actually from the old Chinese novel Journey to the West, and is set around the Tang Dynasty. But not all dances that are featured are from ancient times.

Ms. Matusik said, referring to The Power of Compassion, “I think that’s the most passionate part that I have seen and we are only half way through. So it is exciting!”

Turning to discuss the talent, “I am infatuated,” Ms. Matusik said. “The performers are very on target, they are very in-sync, and they are passionate dancers as well as the orchestra. It sounds wonderful.”

“The dance is exceptional!” said Mr. Scharnell. “And the grace of dancers is something to behold. When they back-kick, (all the dancers) go way higher than our heads, it is an amazing feat!”

The traditional Chinese dance is the heart of Shen Yun Performing Arts. The music, performed by world class musicians, is a strong part of the storytelling and helps set the atmosphere. Moreover, some of the musicians are featured in solo performances.

“I find there is a lot of energy, a lot of energy in the dancing, as well as the music, the piano player blew me away,” commented Ms. Matusik. “She was really, really very good.”

“It is a unique performance,” added Mr. Scharnell. “I love the blend of the Chinese instruments with the traditional Western instruments. It is beautiful.”