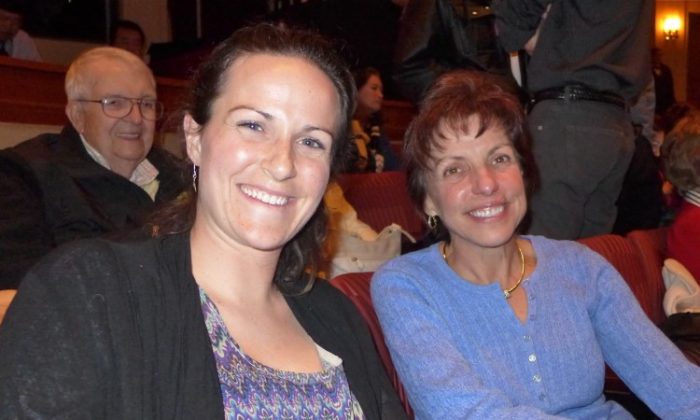 ESCONDIDO, Calif.—Shen Yun Performing Arts Touring Company was enthusiastically welcomed by theatergoers and cultural seekers on its opening performance at the California Center for the Performing Arts on Friday evening, Dec. 28.

Through the performing arts, dance, music and song, China’s 5,000-year history is brought to life with the telling of ancient myths and legends.

Enjoying this evening’s performance were restaurant manager Jennifer Lombardo and her aunt Lisa Boudreau, who is a sales manager with Johnson & Johnson. It was the first time Ms. Lombardo had seen the New York-based Shen Yun. She said: “I really loved the costumes; [they] just kind of flow all together and you can see all the colors very nicely.”

Every costume in a Shen Yun performance is presented with brilliant colors, displaying a splendid spectacle—from the Tang Dynasty’s “Raiment of Rainbows and Feathers” to imperial dragon robes, phoenix coronets, and cloud capes, from the civil official’s headdress and robes to the warrior’s helmet and armor, explains Shen Yun’s website.

Following China’s ancient history, beginning with the Yellow Emperor down through the Tang and Song dynasties, up to the present day, history unfolds on stage, engaging the audience in an entertaining way to learn about the people of China.

Both Ms. Lombardo and Ms. Boudreau enjoyed hearing the different stories and learning about China’s culture.

Ms. Boudreau said: “I love the show … the colors of the costumes and the stories that are being told in each, they’re very dramatic. It’s definitely a great experience, with the music and the dancing and the costumes … very relaxing and fun.”

Shen Yun Performing Arts Touring Company will be in Escondido for performances at the California Center for the Arts until Dec. 31.