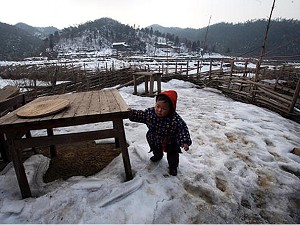 A child plays in snow at the Dahuping Village on in Yongxiu County of Jiangxi Province, China. (China Photos/Getty Images)
News

Zhu Lieke, deputy head of the State Forestry Administration (SFA), said in a news conference on February 19 that roughly 18.6 million hectares of forest from 19 snow-afflicted provinces were damaged, equaling 10 percent of the total forest area in China.

The destruction has caused huge economic losses to forest farmers who largely rely on forestry-related work as their sole source of income Over 9.24 million people had their income severely affected in Hunan Province alone, according to Zhu.

Zhu estimated in the disaster-struck areas the weather would reduce the income of forest farmers this year, and for the next three to five years, while the gap between the supply and demand of timbers would become larger.

Zhu pointed out, the losses sustained by the forestry industry have been extremely rare. Over 1,781 state-owned forest farms and 1,200 nurseries were damaged. This includes the Nanling National Forrest Park in Guangdong Province, where more than 90 percent of the trees were destroyed.

Yin Weilun, head of a snow disaster inspection team of the SFA, recently announced findings that the heavy snowstorms had severely damaged the ecosystems of the forests in Hunan’s Chenzhou City, causing an ecological setback of 20 years.

Other regions were hit even worse and Yin estimated that they would need 30 to 50 years to recover. In Hunan, 177 state-owned forest farms, 99 state-owned nurseries, 114 forest industries and farms, 12 national nature reserves, and 33 national forest parks have been heavily affected, with economic losses exceeding 12 billion yuan ($1.68 billion).

According to experts in the team, if this spring weather doesn’t revive the majority of trees in the affected areas in time, it could, during flood season in this summer, lead to heavy mud and landslides, increase in water run-off and other serious forest disasters. The large number of trees toppled in the storms could also lead to risks of forest fires.

It was reported that there had been 15 occurrences of forest fires or fire alarms between February 13 to 18 in Hunan’s Henyang City–over 13.33 hectares of forest were consumed in these blazes.