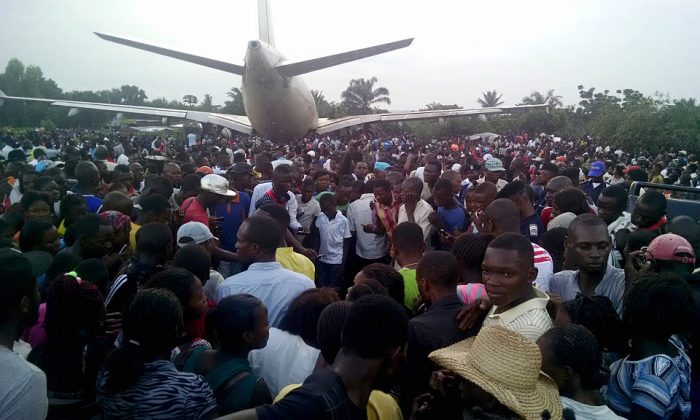 People gather around an Airbus A310 cargo jet that overshot the runway while landing in the central city of Mbuji-Mayi, Congo, killing seven residents with homes adjacent the airport on Dec. 24, 2015. (Stringer/AFP/Getty Images)
Africa

Air accidents are relatively frequent in Congo due to lax safety standards.

The plane had been rented by the national electoral commission (CENI) to deliver election materials to Tshikapa, a city near the border with Angola, and contact was lost as it flew back to the capital on Thursday.

“The cargo plane crashed 35 kilometers from the city of Kinshasa, leading to the death of seven crew members,” the CENI said in a statement.

Earlier on Friday, a senior executive at Gomair, the company operating the plane, confirmed the crash, but did not say how many people had been on board.

The incident follows a tumultuous week in Democratic Republic of Congo, which has seen the long-anticipated election postponed for a week to Dec. 30 due to logistical problem, clashes between protesters and police, and the deaths of over 100 people in fighting among ethnic groups in the northwest.