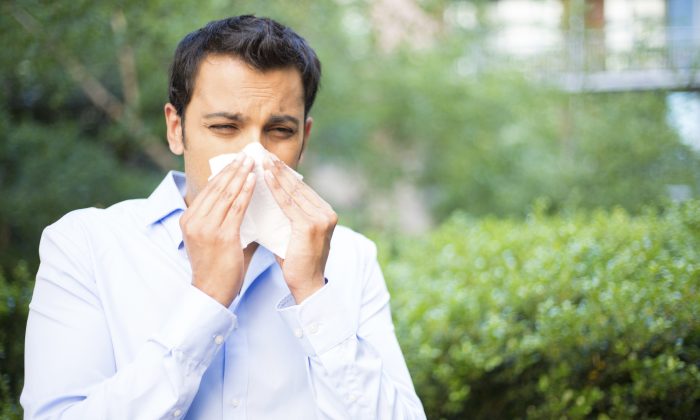 Your sinus troubles may actually be a problem with your lungs.(nandyphotos/iStock)
Mind & Body

Situated in the center of the face, the nose has many important roles. When you inhale cold air, it takes the nose a quarter of a second to heat it up to around 95 degrees, a temperature appropriate for the human body. It also adjusts the humidity of inhaled air and purifies it by filtering out foreign particles.

The nose is also our organ of smell, and the nasal cavity is important for articulating consonant sounds like “m” and “n.”

Inflammation of the mucus membrane of the nose becomes particularly severe in winter when cold and wind make the nose work substantially harder to quickly warm up air entering the body.

When the nose is healthy, it maintains appropriate levels of moisture and temperature. However, if the nasal cavity becomes excessively dry or moist with abundance of discharge, diseases will manifest in the nose.

If the nasal cavity is too dry, mucus fails to perform its cleaning role properly, and viruses and pathogens can attach themselves to the inside of the nasal cavity and will not be discharged. On the other hand, if there is excessive mucus, it flows like floodwaters into places that it should not enter. When mucus settles in places it should not be, it becomes stagnant.

The sinuses are four pairs of cavities that connect to the nose. The maxillary sinuses, located in the cheekbones, are where 90 percent of sinusitis manifests.

As mucus flows through the sinuses, tiny hair-like organisms called cilia and the mucous membrane help filter it and eliminate germs. The sinuses also help cool the blood destined for the brain.

Since the nose is closely linked to the eyes, ears, and sinuses, inflammation in the nose can easily lead to problems in these areas.

However, when a common cold or inflammation of the mucus membrane manifests, and the mucous membrane swells, it blocks the entrance to the sinuses, preventing the inflow of fresh air and the removal of mucus. When mucus stagnates in the sinuses, pathogens and fungi can proliferate. Just as stagnated water gives rise to the conditions for decay, stagnated mucus induces further inflammation, eventually leading to sinusitis.

The nose is also closely connected with the lungs. In Korean medicine, the lungs are said to govern the health of the nose, and the nose is seen as a subsidiary organ of the lungs. Thus abnormalities in the lungs can manifest as diseases in the nose.

Therefore, the treatment of inflammation of the nose should not be limited to the nose. It is possible to fully cure nasal inflammation only if pulmonary functions, which are the core of the respiratory system, are fortified.

Cleaning the lungs restores the proper moisture balance and also fortifies the tonsils. When the tonsils are healthy, they generate a type of white blood cell (lymphocytes) that are key to the immune system and markedly improve the self-healing ability of the body.

As your immune system works on inflammation of the nose, yellowish lumps will be discharged from it. This is a welcome sign because it means that mucus from deep in the nose and sinuses is being cleaned out. It is possible to have a complete cure only if this mucus is expelled and full functioning of white blood cells is restored.

In Western medicine, the main treatments for inflammation of the nose are antihistamines and decongestants, and treatments for chronic sinusitis are antibiotics, steroids, and surgery. However, from the Korean medicine perspective, such treatments work against the natural processes of the body and will induce recurrence and side effects.

Even though Western treatments may appear to be effective by suppressing the symptoms temporarily, they actually destroy the body to a greater extent. If pharmaceutical drugs are used continuously, they can cause serious side effects in very little time.

Surgery is likewise not a surefire treatment for sinusitis. I once had a patient visit me who had a doctor tell him that his nasal inflammation and sinusitis could be healed by straightening his deviated (crooked) septum (bone and cartilage dividing the nasal cavity). This patient had three surgeries, but said they were “absolutely useless” because he still experienced repeated bouts of illness.

I emphasize once again that artificial treatments with scalpels or chemical drugs cannot sever the chains of the vicious cycle of aggravation and recurrence that cause chronic sinusitis.

In particular, when inflammation of the nose is allowed to persist, treating the other secondary conditions stemming from it will not get rid of it. On the other hand, if inflammation in the nose is treated properly and completely, the secondary diseases will automatically be treated.

If the lungs are treated with Korean herbal medicines, after approximately three months the symptoms associated with inflammation of the nose, such as excessive mucus discharge, sneezing, stuffy nose, coughing, and postnasal drip, will be eliminated. Moreover, headaches will disappear, patients will find their heads feel clearer, and they will be better able to concentrate.

As soon as the functioning of the white blood cells improves, this will eliminate the causes of inflammation of the nose, and the subsidiary diseases, such as sinusitis, earaches, and pinkeye, will be eliminated in no time.

Once the root of the problem has been taken care of, it is important to prevent recurrence.

The most definitive prevention is to prevent common colds that induce nasal inflammation in the first place. Through continuous pulmonary cleansing, the health of the tonsils, which are the guards of health for the body, will be maintained, and it will then be possible to thoroughly guard the body against any common cold virus.