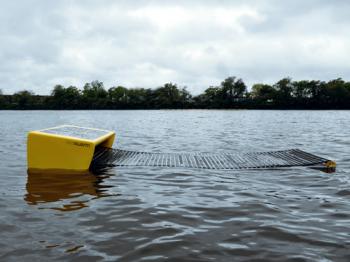 Seaswarm Robots Could Clean Gulf Oil Spill in a Month

By Conan Milner
biggersmaller
Print
Seaswarm, an autonomous, solar-powered skimmer, may be the answer to less expensive and more efficient methods for cleaning up future oil spills. The robot prototype promises to absorb 20 times its weight in oil.

Created by researchers at MIT’s Senseable City Lab, Seaswarm employs a conveyor belt of absorbent, nanowire mesh. The specially deigned mesh can suck up oil on the water’s surface and then process and dispose of the oil it’s collected. The Seaswarm can continue to absorb more of the spill while the robot autonomously navigates and cleans the ocean for weeks on end.

Researchers claim that 5,000 Seaswarm robots could clean up an area the size of the recent Gulf oil spill in about a month. Operating around the clock, a swarm of these relatively inexpensive, autonomous skimmers could constantly consume and dispose of oil without human intervention.

Compare this to the 800 conventional skimmers deployed earlier this summer in the Gulf of Mexico which needed to constantly return to the shore for maintenance and in the end were only able to collect an estimated 3 percent of the massive spill.

The first Seaswarm prototype was tested earlier this month on the Charles River in Eastern Massachusetts.

“We envisioned something that would move as a ‘rolling carpet’ along the water and seamlessly absorb a surface spill,” said Senseable City Lab Associate Director Assaf Biderman in a statement.

“This led to the design of a novel marine vehicle: a simple and lightweight conveyor belt that rolls on the surface of the ocean, adjusting to the waves,” Biderman said.

Most of Seaswarm’s 16-foot-long, 7-foot-wide design is composed of its conveyer belt. The rest is reserved for a solar panel section at the front for self-propulsion. The conveyer belt is covered with a special fabric created by MIT Visiting Associate Professor Francesco Stellacci.

Previously featured in a paper published in the journal Nature Nanotechnology, this nanowire fabric can absorb up to 20 times its own weight in oil, while repelling water. When the material is saturated, it heats up and burns off the oil it’s collected, leaving the nanofabric available to absorb more oil.

Researchers explain that the Seaswarm units detect the edge of a spill and move inward. They are designed to use wireless communication and GPS to manage their coordinates and ensure an even distribution over a spill site.

While a single vehicle could clean an entire site autonomously, the swarm behavior of the robots allows several vehicles to work together in a coordinated effort for faster cleaning.

A Seaswarm prototype is currently on display at the Venice Biennale’s Italian Pavilion—an international art, music, and architecture festival. The theme of this year’s festival addresses how nanotechnology will change the way we live in 2050.