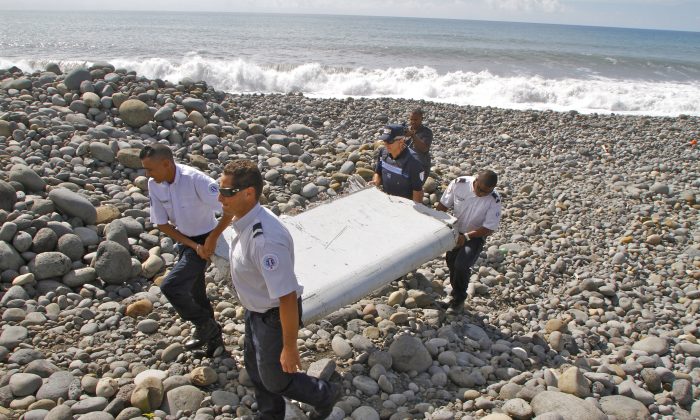 SAINT-ANDRE, Reunion—Under a microscope and expert eyes, the wing fragment that washed up on the beach of this volcanic island could yield clues not just to its path through the Indian Ocean, but also to what happened to the airplane it belonged to.

Analysts at the French aviation laboratory where the scrap was headed Friday can glean details from metal stress to see what caused the flap to break off, spot explosive or other chemical traces, and study the sea life that made its home on the wing to pinpoint where it came from.

French authorities have imposed extraordinary secrecy over the 2-meter (6-foot) long piece of wing, putting it under police protection in the hours before it left the island of Reunion. If the fragment is indeed part of the missing Malaysia Airlines Flight 370, it means the wreckage may have drifted thousands of kilometers (miles) across the Indian Ocean to this French island off the east coast of Africa.

Wrapped and loaded as cargo, it was headed to a military aviation laboratory near the city of Toulouse, Europe’s aviation hub.

“With a microscope, that can learn details from the torn metal,” said Xavier Tytelman, a French aviation safety expert. “You can tell whether a crash was more horizontal or vertical … You can extrapolate a lot.”

John Cox, president and CEO of Safety Operating Systems and a former accident investigator, said minute characteristics of the metal could indicate attitude and vertical speed of the aircraft when it impacted.

“It won’t tell you how the plane crashed, but it will be a step in that direction,” Cox said.

Barnacles encrusting the wing’s edges would be studied for clues to plot the wing’s journey through the Indian Ocean, but Tytelman said there could be other microscopic life clinging to the metal or bottled up inside that could further indicate where the wing traveled.

“It’s been 16 months from the crash and everything fits together,” said oceanographer Arnold Gordon of Columbia University’s Lamont-Doherty Earth Observatory. “So I think the probability that it’s from 370 is pretty high.”

The currents from the Indian Ocean flow in a counter-clockwise way that would take a crash from west of Australia to Reunion Island, Gordon said. The amount of barnacles on the debris is consistent with other debris that he’s seen in the ocean for more than a year. And it’s the right type of plane.

Pictures of the “flaperon” show that it is missing its drive arm, which directed up-down movement — but there appears to be relatively mild damage at the location where the drive arm tore away, said William Waldock, a former U.S. Coast Guard officer and a professor at Embry-Riddle Aeronautical University in Prescott, Arizona, who teaches aircraft search and rescue.

“One of the things I guess is a little surprising is how intact the flaperon is,” he said. “It argues that it wasn’t a very violent impact, which goes along with some of theories that it just ran out of gas and glided down.”

The statement said a shred of suitcase found near the wing fragment would also undergo forensic testing at a Paris-area government lab, and searchers continued Friday to scour the Reunion coastline for other possible debris, including the man from the beach maintenance crew who found the wing fragment.

Officials hope to have at least some answers soon, keenly aware that families of those on board Flight 370 are desperately awaiting word on the fate of their loved ones.

“The most important part of this whole exercise at the moment is to give some kind of closure to the families,” said Australian Transport Minister Warren Truss, whose country is leading the search for the plane in a desolate stretch of ocean off Australia’s west coast.

Even if the piece is confirmed to be the first confirmed wreckage from Flight 370, there’s no guarantee that investigators can find the plane’s vital black box recorders or other debris. A multinational search effort has come up empty.

Air safety investigators, including one from Boeing, have identified the component as a flaperon from the trailing edge of a Boeing 777 wing, a U.S. official said. The official wasn’t authorized to be publicly named.

Scanning the beach’s distinctive black volcanic sand and stones on Friday, searcher Philippe Sidam picked up a plastic bottle for laundry detergent. “This is from Jakarta, Indonesia,” he said, pointing to the writing on the bottle. “This shows how the ocean’s currents bring material all the way from Indonesia and beyond. That explains how the debris from the Malaysian plane could have reached here.”

Reunion environmental worker Johnny Begue told The Associated Press that he stumbled across the plane part on Wednesday morning while collecting stones to grind spices.

“I knew immediately it was part of an aircraft, but I didn’t realize how important it was, that it could help to solve the mystery of what happened to the Malaysian jet,” Begue told the AP.

Australian officials expressed skepticism that the suitcase fragment was associated with the wing part. Truss, the transport minister, noted that there did not appear to be any marine life attached to the suitcase, indicating it probably hadn’t been in the water for long. But he described the wing part as a major lead.

Investigators have found what may be a maintenance number on the wing piece, which may help investigators figure out what plane it belongs to, Truss said.

Truss expects French investigators will also try to determine how the part separated from the rest of the aircraft, and whether it shows evidence of fire or other damage, which might explain how the plane crashed.

Ocean modeling predicted that currents would eventually carry any floating wreckage to the African coast from its suspected crash site.